Is It Normal to Throw Up During Childbirth?

When a baby is brought into the world, women find themselves in a moment of tension and anxiety in which a variety of unexpected reactions can take place. Nausea and vomiting are some of them. 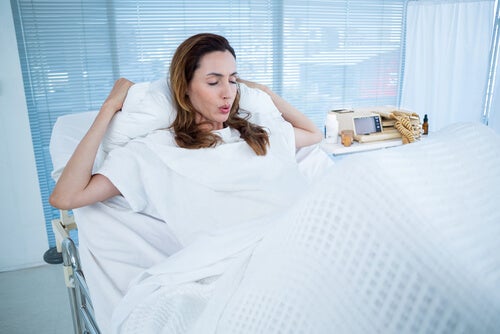 Some women are worried when they feel an intense desire to throw up during childbirth. This can happen to any woman. Even those who don’t experience this symptom throughout their pregnancy aren’t spared from vomiting during childbirth.

Is it normal to throw up during childbirth?

Although it doesn’t happen to all women, it’s usually a daily event in the delivery room. It’s not a cause for alarm. Vomiting during childbirth doesn’t necessarily indicate that you’re facing a health issue.

However, it’s essential to monitor the frequency and amount of vomiting, as these can trigger dehydration.

Is it okay to throw up during childbirth?

The experience of throwing up is always unpleasant, and experiencing it during childbirth is even more uncomfortable. However, as difficult as it may seem, it has a positive side.

Throwing up during labor implies exerting extra effort for the woman which causes an increase in dilation.

The mother’s effort helps the baby get better situated in the cervix. Some women affirm that, when they throw up during childbirth, it’s because it’s about to end, since what is left of the delivery will advance quickly.

Why do women throw up during childbirth?

There are several reasons for the desire to throw up during childbirth. These are the most frequent:

Not having eaten food for an extended period

Some patients present a lack of appetite when they’re about to give birth. For others, labor seems to leave them no time to eat, so they prefer not to.

While on an empty stomach and facing a moment of high anxiety and intensity, the body experiences changes such as alterations in blood pressure. Then nausea sets in, which usually ends in vomiting.

The production of a large amount of prostaglandin can increase intestinal motility and, consequently, nausea and vomiting. When the birth begins, you’ll likely feel stomach discomfort, which is perfectly reasonable.

The parasympathetic system stimulates the viscera and, with it, the emptying of the digestive system. This emptying can happen either through the exertion of feces or vomit.

As a result, this reduces the possibility that these remains serve as an obstacle to the fetus in its descent through the birth canal.

“Although it doesn’t happen to all women, it’s usually a daily event in the delivery room. It’s not something parents should be alarmed about.”

A very fierce headache can cause nausea and the desire to vomit. The pain of giving birth is one of the strongest a woman can experience. Therefore, it’s not uncommon to presume that the woman is very eager to throw up during childbirth.

During that moment, the woman’s environment is fraught with stress: the doctors and the family on the one hand; pain, pressure, fear, and anxiety on the other. The perfect formula for you to feel the need to regurgitate everything you may have eaten.

In some cases, epidural and synthetic oxytocin cause nausea and vomiting as side effects. These side effects may be one more reason for the woman to feel like throwing up during childbirth.

Epidural anesthesia or the supine decubitus position can cause blood pressure to drop; as a consequence, hypoxemia may occur. Both can cause vomiting.

Sudden body movements caused by the intense contractions and distension of the digestive viscera can cause vomiting during the process of giving birth.

While it’s true that the cause for vomiting during childbirth is, in general, completely healthy, future mothers always have fear when it comes to bringing their expected child to the world. The reason is that there may be complications at the time of delivery.

Your body will at all times respond to natural impulses or the environment, so there is no reason to worry if you feel like vomiting.

Throwing up during childbirth is normal, you should only watch that it doesn’t happen too many times to avoid complications related to gastritis or other types of stomach problems.