Toxoplasmosis and Prohibited Foods During Pregnancy

Some diseases that expectant mothers have could end up affecting the fetus. One of these is toxoplasmosis, which is linked to certain foods. 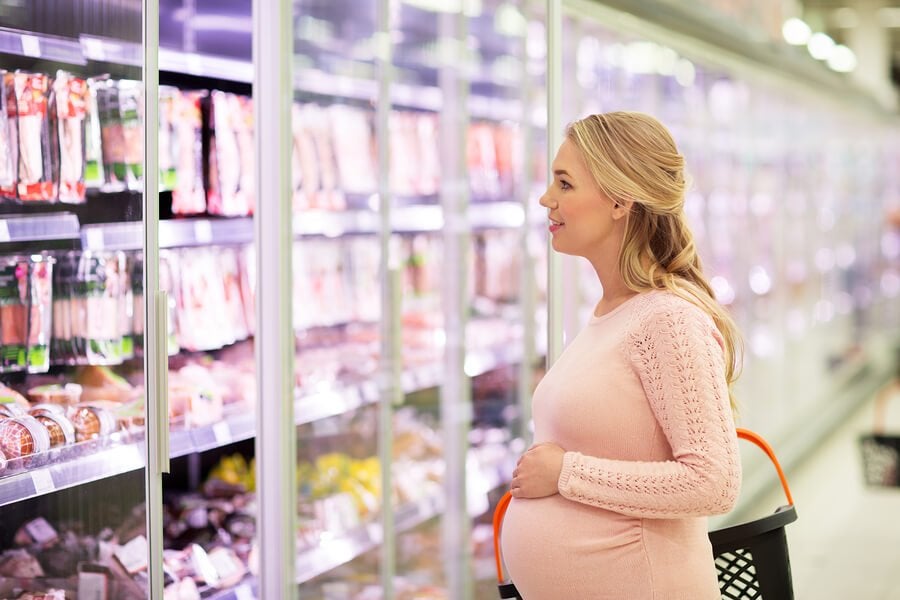 Certain infections can affect future mothers during pregnancy. Some of them can spread to the fetus and cause serious consequences. In this article, we’ll talk about toxoplasmosis. We’ll also provide a list of foods to avoid while pregnant.

Toxoplasmosis is a food-borne disease. It’s caused by the parasite toxoplasma gondii. This is very common and doesn’t usually cause major problems. However, it can cause issues if it reaches the placenta. It could spread to the growing baby.

In this sense, taking care of food properly is key to preventing this condition. First, we’ll explain the effects it can have on the newborn.

Effects of toxoplasmosis on the fetus and newborn

Babies that are affected by toxoplasmosis can be born prematurely and underweight. This disease can also leave scars on their retinas and give them jaundice. On the outside, you might notice jaundice if they have a yellowish skin color. However, all of these are mild issues.

On the other hand, there are more serious problems. One of these is hydrocephalus. This is where fluids build up in the child’s brain. It makes his head physically bigger and gives him constant migraines. In addition, some newborns may experience chorioretinitis, a condition that affects their eyes.

In the worst case, this infection can become a very dangerous condition called erythroblastosis. With this disorder, the mother produces antibodies that attack the fetus’s red blood cells. As a result, there will always be a chance of prenatal death.

We should mention that fetuses in the first trimester of pregnancy are at the highest risk. At this stage, catching the infection could be fatal for the baby.

All animals that feed on grass contaminated with cat feces are carriers. Even handling raw meat can transmit the infection to mothers. So be very careful when preparing food with raw meat.

To avoid risks, we recommend eating cured meats. Many specialists rely on the freezing process to avoid parasite growth in meats or sausages. Among all other animals, pig products are the riskiest to eat.

However, meat-based foods aren’t the only ones that can have this problem. Fruits and vegetables can also be contaminated. That’s why it’s important to wash them well. Be especially careful if you’re eating them raw.

Other risky foods are shellfish, fish, cheeses and unpasteurized milk and coffee. For fish and shellfish, it’s important to wash and cook them properly.

“Toxoplasmosis is a food borne disease. It’s caused by the parasite toxoplasma gondii. Taking care of food properly is key to preventing this condition.”

An excellent recommendation is to put sushi restaurants aside for the first months of pregnancy. When eating fish, eat clean pieces without guts. It’s also a good idea not to eat sausage. If you do, always freeze it before eating.

Expectant mothers are at risk of infection even if they just handle raw meat. Therefore, carefully wash your hands before, during, and after handling raw meat.

Even contact with dirt or grass can be risky. It’s important to wash your hands and face thoroughly during your first trimester. Antibacterial soap is a good investment.

Also, if there are cats in the house, it’s a good idea to check with the veterinarian. You want to make sure your pet isn’t a carrier. Indoor cats that eat dry and canned foods usually aren’t carriers.

How can a pregnant woman know if she has toxoplasmosis?

There’s a medical test that lets pregnant mothers know if they have the infection. This is a blood test called a toxo-test. Most gynecologists actually require it.

There are three possible outcomes. If it’s negative for IgG and IgM, it means the pregnant woman isn’t a carrier. It also means she has never had it. The results could show positive for IgG and negative IgM. This is because she’s had it in the past and is already immune.

Finally, the mother could have negative IgG and positive IgM. This means she currently has the infection. In this case, the doctor will run other tests to know the infection’s duration and intensity.