Umbilical cord problems may result in mild or severe alterations for the baby. That's why an early diagnosis and monitoring are fundamental. 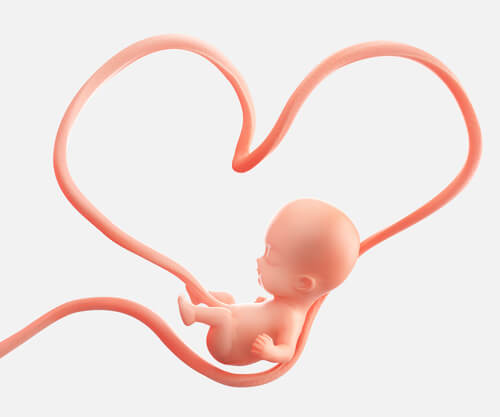 The umbilical cord, together with the placenta, is responsible for the fetus’s feeding and breathing during gestation. It’s undeniably important. However, there are some umbilical cord problems that might occur. We must be on the lookout to prevent them on time.

Firstly, let’s review the umbilical cord’s main functions in order to highlight how crucial it is for pregnancy and gestation. It deals with transporting the nutrients that the mother provides to the fetus through the placenta, delivers highly oxygenated blood to the gestating fetus and also removes the residues from these two processes.

In addition, there are other tasks we might regard as “secondary” in relation to the development of the immune system and the prevention of future pathologies through the analysis of blood from the umbilical cord. This blood is usually stored for stem cell treatments, given the umbilical cells’ ability to adapt to other organs.

“The umbilical cord delivers nutrients and blood and removes residues. Its importance in the development of the fetus is undeniable”

Now let’s list some of the main issues that can arise in relation to the umbilical cord. Though rare, many might even threaten the developing baby’s life.

SUA is one of the most frequent umbilical cord problems. It consists of the existence of only one artery – where there should be two – and one vein inside the cord. This problem manifests in up to 1% of singleton pregnancies and up to 5% of multiple ones.

SUA may originate musculoskeletal, renal, digestive track, cardiac or cerebral malformations, among others. It can be detected from week 22 of gestation.

A close monitoring of the gestation process is advisable when SUA is detected. Even when this is the only problem and there are no major complications, it can cause low birth weight or preterm birth.

This occurs when, once a pregnant woman’s water has broken, the cord comes out of the birth canal before the baby. It’s not too common, since it occurs in one in a thousand births, but it carries a high risk.

Prolapse can also happen at the final stages of pregnancy. This may cause the cord to suffer mild compressions that won’t affect the normal flow of blood and nutrients. On other occasions, however, compression can be stronger. This can result in problems such as changes in heart rate or blood pressure, or nutritional disorders.

In extreme cases, this might carry a risk of cerebral damage or fetal hypoxia, meaning a lack of oxygen for the baby. However, this is quite uncommon and something doctors check for regularly.

Some causes are the baby’s movements inside the uterus or simply the compression of the umbilical cord during labor. Another reason we find is premature rupture of membranes or PROM.

A decisive factor in these cases is how long the umbilical cord was compressed, as well as the intensity of the compression. According to the American Pregnancy Association, when compressed for a long time, a drop in oxygen and blood flow might affect the baby’s brain.

“Doctors can detect prolapse by a fetal doppler or ultrasound”

As for the treatments, two stand out when compression is mild. Firstly, the introduction of saline solution in the uterus before labor to alleviate the pressure that might cause compression.

Secondly, an increase of oxygen in the mother to increment blood flow to the cord. If the prolapse is more serious, such as when the baby comes in cephalic position, a C-section is paramount to avoid a lack of oxygen and endangering the baby’s life.

Knots in the cord

Bearing in mind that the umbilical cord can be up to 56 centimeters long, the movements of the fetus are likely to cause knots around his hands, feet or neck.

Although this doesn’t usually affect oxygen flow, it sometimes happens. In this case, doctors usually perform a C-section to prevent greater risks.

Cord around the neck

This occurs when the cord is placed around the fetus’s neck. Professionals consider it to be one of the main concerns when discussing umbilical cord problems, but it’s usually solved without serious damages. In fact, it occurs in between 20% and 40% of pregnancies.

It derives from the baby’s movements inside the uterus and is very easy to reverse: placing a finger between the neck and the cord while the baby is coming out. If it’s tense and tightens during labor, they constantly monitor the baby to identify any problems. If alterations get worse, they perform a C-section.

The cord is inserted into the placenta through the surface of the ovular membranes, which is between the amniotic sac and the chorion. We find it in 1% of cases, though prevalence is higher in multiple pregnancies.

It can cause another disorder called vasa previa, as well as low birth weight, prematurity or abnormal heart rate.

The happiest moment of your life, that of being a mother, can be overshadowed by the presence of a tumor…

Pregnancy symptoms
How to Treat Nausea and Vomiting During Pregnancy

Nausea and vomiting during pregnancy are the most common symptoms that women experience. This is especially true during the first…