What to Expect During Week 9 of Your Pregnancy 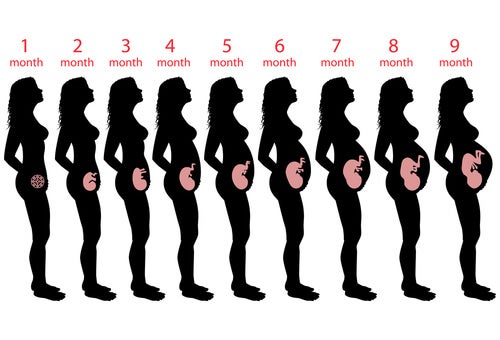 Starting from week 9, your future baby is considered a fetus. This stage is known medically as the fetal stage.

Although the baby doesn’t have a defined shape yet, during the fetal stage it will begin to take on the form of an actual baby, but at the size of a large bean.

Formation of the embryo during week 9 of your pregnancy

During this week, the mother can often feel the baby start to move. However, these movements aren’t deliberate. Rather, they are involuntary reflexes that the baby is beginning to have. The baby’s muscles still aren’t ready to receive orders from the brain.

During the 9th week of pregnancy, it still isn’t possible to know the baby’s sex. This is because the organs haven’t formed yet. However, the fetus already has a pre-established sex from the moment the egg is fertilized, it just cannot be observed.

Although the head continues to be bigger than the body, it is now close to a more normal size. The baby also has fingerprints by this point.

The baby’s mouth is also fully formed. This leads to the baby moving it involuntarily, opening and closing it. This will change over the coming weeks, during which the brain will start to form and connect to the muscles, making voluntary movements.

During this stage of pregnancy, the basic formation of all systems is completed, giving way to the process of connecting all nerves and the maturation of the organs involved.

If you can listen to your baby’s heartbeat, you’ll notice that the rhythm is very fast. It is comparable to an adult’s heart rate after 45 minutes of exercise. The blood is beginning to be distributed throughout the body.

If we could look at the future baby at this time, we would see the skeleton through the skin. This is due to the skin’s translucence. The bones still don’t have any calcium; they are only made of cartilage.

How will your body change?

During this week, your breasts will already have gotten larger and will be heavier and more sensitive. Small dots, some of them raised, may start to appear around the areolas.

The scientific name for these white spots is Mongomery Glands. They appear before milk production. The function of these glands is to keep the nipples hydrated by producing oils.

In this phase, the mother’s uterus reaches twice its normal size. This will produce a feeling of bloating and constant release of involuntary flatulence. However, the baby hasn’t yet moved outside the uterus.

The first checkup is usually scheduled between weeks 9 and 12. This will give you more important information about the health of your future baby. Among other things, you’ll learn the baby’s blood type.

Although you can schedule your first checkup, it isn’t time to do an ultrasound yet. The future baby is very fragile and vulnerable, so it isn’t ready yet for this step. Bit by bit, the fetus will continue developing until the ultrasound can be performed in a few weeks.

“In week 9 of your pregnancy the basic formation of all systems will be completed, followed by the process of connecting the nerves and maturation of connected organs.”

Although it seems like the moment when you’ll see your child for the first time will never arrive, the changes that you experience week by week will make you feel the connection that will forever unite you ever more strongly.