5 Valuable Lessons from "My Neighbor Totoro"

"My Neighbor Totoro" is a film you probably haven't heard of. It was created 30 years ago but has some great lessons to teach us. 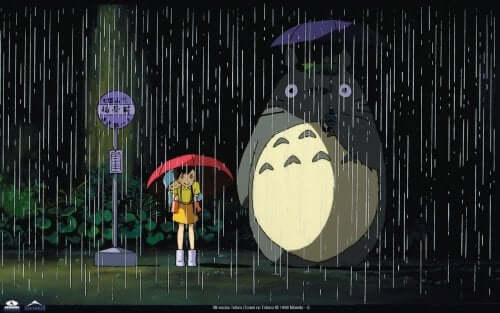 My Neighbor Totoro is a Japanese animated film by Studio Ghibli that’s now in its 30th year. We can consider it a classic of the animation genre and it’s ideal for children.

The film My Neighbor Totoro is a fun, entertaining, and original movie, with very interesting content. Not only do children enjoy it, but adults can also appreciate it. For this reason it’s perfect to watch as a family.

The story provides important lessons about human values, and that’s why it’s highly recommended for both children and adults. In this article we’ll take an in-depth look at the film to see why Totoro, as some people simply call it, is a great choice for your child.

Day-to-day life can be an adventure

Satsuki and Mei are two sisters who are moving with their father to a house in the country. The idea is that, in this way, they’ll be closer to the hospital where their sick mother is. For the two girls, this change in their lives will be a total adventure, despite things not looking too promising at first.

The girls don’t take the move as something that’s going to spoil their routine and cause them stress. From the moment they arrive, they inspect their new home, investigate, and experience each moment as something new and exciting, as if they were discovering a whole new world full of surprises.

5 valuable lessons from the film My Neighbor Totoro

Learning to investigate means learning to be autonomous

Satsuki and Mei go beyond the limits that the adults had imposed on them in their eagerness to discover things and explore. They go beyond the garden, even though they had been told not to. They also go out into the forest, which is how they meet the giant Totoro. And when the adults find out, they don’t tell the children off, but rather they give them the freedom to learn for themselves.

This has a clear symbolism and message: letting children have autonomy is important. In Japanese society, they’re very accepting of this and it has always proven to have positive consequences.

This ability to learn to be autonomous in Japan can be seen, for example, in how children, from a very young age, are able to take on important responsibilities that children in other countries wouldn’t be able to cope with. One such example is going to school on their own from a very young age on public transport.

The director and creator of the film, Hayao Miyazaki, aims to depict the childhood stage as a time of total freedom. This includes the possibility of getting to know all the secrets that adults can’t see, represented in the film as spirits and gods.

They’re able to see Totoro, but they also discover the house dust goblins, Susuwatari, which literally means “wandering soot.” Susuwataris are small, round, black beings made of soot.

To them, the dust of the house isn’t dust, it’s something else, and this happens again and again with everything around them. Adults accept that these magical things are there, but they can’t see them anymore, as they used to when they were children.

The importance of nature in My Neighbor Totoro

The film My Neighbor Totoro is, in itself, a great metaphor, and has a lot of symbolism. The girls have a sick mother who is far away from them. But their father helps them in any way he can, and gives them their space too. On top of that, they have the elements of nature that always welcome them.

“Nature is where Satsuki and Mei can take refuge and dream, where they find hope in the moments when they miss their mother.”

For the director Miyazaki, instilling a love of nature in children is essential. For him, connecting with nature is what can save us and set us free, and children should know this. The elements in nature, whether they’re fantastical or not, are the ones that can teach us the path to freedom.

Who or what is Totoro? The need to protect children

Totoro is a being that any child would want to know. He’s a monster, but huggable – a kind, protective being with a big heart. He’s not a docile creature, but he isn’t dangerous. He also has a great character. The children aren’t frightened by him; they feel safe and protected in his company.

“The spectator isn’t exactly sure what Totoro is. But he’s exactly what every young child would want when faced with the world of adult problems: a protector.”

In his book Totoro no Umareta Tokoro (“The place where Totoro was born”), the director tells us that the title of the film was originally Tonari ni iru Obake, that is, “The ghost beside me.” In Japan, the Obake are considered to be supernatural beings that have taken on a temporary transformation.

For Miyazaki, Totoro is a mysterious being who specializes in finding loved ones. He’s a giant, but isn’t at all threatening, nor is he scary. His enormous size is associated with the girls’ need for protection.

To conclude, My Neighbor Totoro is a film with many mystical elements that tells a quite different, yet exciting, story. The main characters are two ordinary girls who get involved in extraordinary things. If you’ve never seen this magnificent Studio Ghibli creation before, then we highly recommend that you watch it – or, if you have seen it, then why not give it another watch?

Benefits of Movies for Kids: Recommended Films
Movies are one of the best forms of entertainment. However, it may surprise you to hear that there are real benefits of movies for kids.  Read more »
Link copied!
Interesting Articles
FIlms and series
The Best Disney Pixar Sequels to Watch as a Family