"A Shorter Letter" – A Short Film About Excessive Gift-Giving

"A Shorter Letter" is a short film that allows us to reflect on the problem of excessive gift-giving at Christmas time. 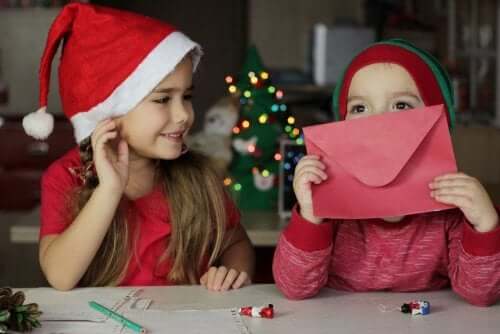 A Shorter Letter is a short animated film that all mothers and fathers should see with their children during the holiday season. It allows us to reflect on the excess of gifts that children receive and the little value that they actually give them.

In this article, we’ll present a brief summary about this wonderful short film. However, you have to watch it in order to appreciate and understand it. Still haven’t seen it yet? Click here!

The consumer society: a problem that affects children

We live in a consumer society in which we’re constantly shopping and spending; sometimes, without managing the money we earn. This also affects children since they grow up observing the consumerist behaviors in their role models.

Over time, kids assimilate these behaviors and grow up accustomed to living in an environment full of toys and surrounded by a multitude of whims. This leads them to not appreciate what they have.

For this reason, Audi initiated a social campaign in 2018, creating an animated short film called A Shorter Letter. The intention was to make citizens aware of the problem of our current consumption habits, especially during Christmas.

Consumption society: Prodigious container full of nothing. An invention of high scientific value, which allows the elimination of real needs, through the timely imposition of artificial needs.

A Shorter Letter: a short film about excessive gift-giving

A Shorter Letter tells the story of Tom, a boy who is angry and disappointed because Santa didn’t bring him the remote control car he wanted for Christmas. Instead, he received other toys that can also be lots of fun to play with.

One day, Tom’s parents give him a letter from Santa Claus himself. In it, he explains that the important thing is not to have many toys, but to make the most out of the ones he has. This makes the little one reflect; so he decides to write a letter to The Tooth Fairy.

In that letter, he tells her that he doesn’t need her to bring him the remote car that he initially wanted. He thinks he won’t need it since he now has a new neighbor with whom to share toys. In fact, coincidentally, this new friend has the remote control car that Tom wanted so much.

Finally, the short film ends with a beautiful phrase:

Having all you need is having everything.

How to write a shorter letter

We must help children to write a shorter letter. To facilitate this task, Audi created a digital tool they can use to write a letter to Santa Claus and The Tooth Fairy in an appropriate way. You just have to follow three steps:

However, selecting only four gifts isn’t always an easy thing to do. You have to take into account which gifts are the most appropriate ones for the kids. Thus, it’s advisable to choose four of these options:

Additionally, you should choose these gifts based on your children’s characteristics, tastes, and hobbies.

“Better than all the gifts under the Christmas tree is the presence of a happy family.”

7 Wonderful Christmas Movies for the Whole Family to Enjoy
Keep this list of excellent Christmas movies on hand to keep your family entertained and connected during this holiday season. Read more »
Link copied!
Interesting Articles
FIlms and series
The Best Disney Pixar Sequels to Watch as a Family