The uncontroled consumption of energy drinks is becoming more and more common among adolescents. This practice can have long-term consequences. 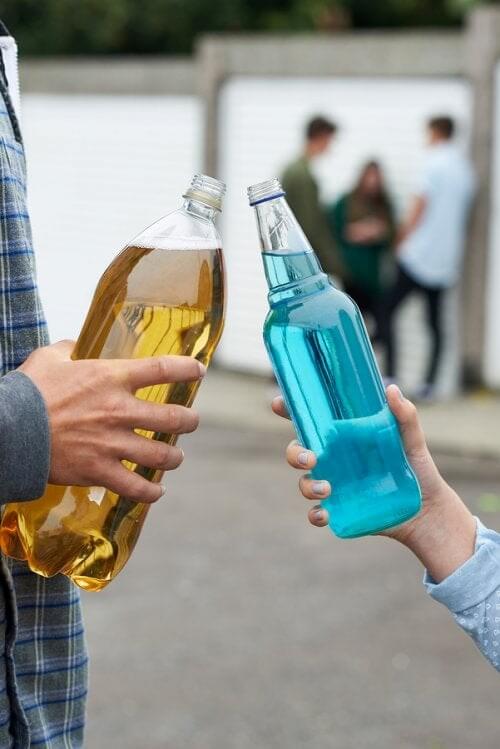 Energy drinks are currently popular and widely available, but unfortunately, this has led some teenagers to believe they’re completely safe to drink. This fact is worrying to both parents and nutritionists because it can lead to abusing energy drinks.

Teens like the effects that energy drinks can have on their body. Supposedly these products give them an extra boost of energy and stimulate their metabolism. Energy drinks are also said to increase physical endurance.

The marketing and distribution of these energy drinks are unregulated in many areas. The ad campaigns that product manufacturers use are slick. Moreover, such ads never emphasize the side effects or possible negative consequences of consuming too many and abusing energy drinks.

This has raised concern among authorities in many countries. According to the European Agency for Food Security, more than half of those who consume energy drinks are adolescents.

Moreover, there are even children as young as 10 years old who have tried energy drinks or drink them occasionally. This means there might be an even bigger population set to consume these products in the near future.

Normally, teenagers who abuse these products consume more than 7 liters a month. This consumption rises during exam periods, during athletic events, competitions, and parties.

What do energy drinks contain?

Energy drinks are capable of invigorating the body. They have a combination of ingredients that act as stimulants, and this includes high doses of sugar and caffeine. Manufacturers also commonly use vitamins, amino acids, minerals, and herbal extracts to make them, including the following:

Caffeine: Caffeine is a common stimulant present in many common beverages like coffee and tea. It puts the body on alert. Moderate consumption of coffee (200 mg to 400 mg daily) shouldn’t have any negative consequences. Indeed, one cup of coffee a day provides a good amount of antioxidants.

Taurine: This is an amino acid that helps with neurological development and it plays a role in the regulation of water and mineral salts in the blood. Its ability to improve physical stamina makes it a popular ingredient in these drinks.

Guarana: This is a fruit that contains a high amount of caffeine. Manufacturers add guarana to energy drinks to intensify the feeling of energy. It also increases a person’s physical capacity to do physical work.

Ginseng: Many believe this herb increases resistance and mental and physical performance.

These products also contain glucuronolactone and B vitamins like Thiamine and Cobalamine. This helps stimulate brain activity. Another ingredient frequently used in energy drinks is carnitine, which helps to create energy in cells.

Mixing these products with alcohol: A dangerous mix

One of the most harmful habits to arise in recent years among teenagers is to mix alcohol with energy drinks. The sweet concoction they make from mixing both these elements together helps teens continue partying for much longer. However, that isn’t always safe or the wisest choice.

The consumption of alcohol during adolescence already has health and developmental consequences of its own. Even knowing all the risks, teenagers drink in most cases to be rebellious or due to social pressure. This puts teenagers in situations where other teens will probably offer them some of this dangerous mix to drink.

By abusing energy drinks and alcohol, they’ll end up consuming more alcohol because it will take them longer to feel the excessive effects of alcohol on the body. Adolescents will continue drinking beyond what their bodies are able to withstand.

This is risky behavior because adolescents can become extremely inebriated to the point of an ethylic coma or heart failure because of the dangerous effects of this mix on their hearts.

Consuming energy drinks on occasion isn’t a threat to anyone’s health. But when adolescents abuse energy drinks, it’s not because they’re ignorant of their effects. These products contain high levels of sugar and stimulants like caffeine that can have a negative effect on our health when we exceed the recommended amounts.

The heart is most affected because these drinks can produce tachycardia, arrhythmias, and an increase in blood pressure. Among the most common symptoms are headache, nervousness, nausea, and vomiting. In addition, in some cases, the adolescent can develop a dependency on the way these unhealthy concoctions make them feel.

It’s safe to consume energy drinks when consumed in moderation and they’re part of a healthy diet. Adolescents also need to be aware that energy drinks are a part of their daily caffeine intake. They’ll have to avoid other beverages containing caffeine during the day.

Furthermore, you should avoid drinking hydrating energy drinks unless you’re participating in strenuous physical activity. Hydrating drinks containing electrolytes should also be avoided before eating a meal, or when mixed with alcohol or drugs.

It’s important to educate adolescents that abusing energy drinks is dangerous. Generating awareness about the nefarious effects of drinking energy drinks in excess is necessary to prevent any long-term consequences on their health.

Adolescence is a period in which people experience many hormonal changes and adopt certain habits. These hormonal alterations cause external…

Healthy habits
The Risks of Skipping Breakfast During Adolescence

Skipping breakfast during adolescence is more common than you might think. Actually, between 16 and 30% of teenagers don't have…

Throughout this article, we'll learn how emotional eating can be managed and which factors cause it. But before that, we'll…