The cognitive biases that exist during adolescence lead young people to feel observed, unique and invincible. Today's article will tell you more. 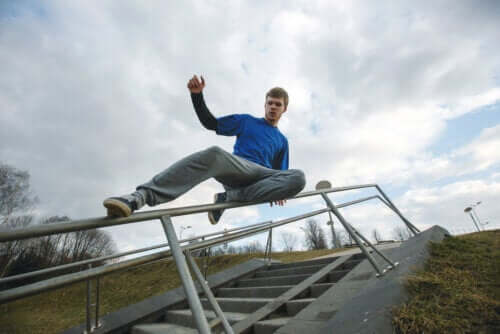 Adolescence is a complex stage in life that involves all sorts of major changes. Physical, intellectual, social and emotional development in young people reaches many big milestones. However, if you aren’t aware of the processes that occur during this phase, you might perceive teens as incomprehensible. To prevent this from happening, we’ll talk today about the way teens think and their cognitive biases.

When children reach puberty, they begin to think, feel, and behave in a different way than they did before. Many parents are shocked to observe how their affectionate and obedient children all of the sudden become stubborn and independent.

However, this transition is normal. And if you manage to understand it, then you’ll be able to accompany your children through adolescence without fear.

With the arrival of adolescence, minors reach the formal operational stage, according to Swiss psychologist Jean Piaget. This involves a higher level of cognitive development. However, this stage also comes hand in hand with so-called adolescent egocentrism.

This egocentrism is based on a confusion between the elements of internal thought and external reality. So, young people can sustain excessive confidence regarding their own ideas, without there being concrete facts that support them. This intellectual egocentrism opens the door to cognitive biases, which lead to distorted beliefs.

An example of this phenomenon is when teens become totally upset before a get-together with friends because they don’t know how to cover up an unpleasant pimple. This elevated state of distress comes from the thought that everyone there will be staring at their imperfection. In other words, they think the other attendees will be just as aware of the pimple as they are.

This is known as the imaginary audience effect, because all of this external attention is simply a figment of a teen’s imagination. Most likely, every teen in the room is so fixated on their own insecurities that they don’t even notice anyone else’s problems.

Just the same, the feeling that others are constantly evaluating them gives teens the sense they are under major pressure. What’s more, it leads them to act in inappropriate ways in order to gain social acceptance and recognition.

It’s very common to hear teenagers complain that no one understands them, and this comes from the personal fable. Given this bias within their thinking, youth think they’re the only ones that feel the way they do… They’re the only ones who face the realities they face. They have the feeling that their personal experiences are truly special and unique, and that no one has ever been in the same situation.

Therefore, for example, when they go through a breakup, teens will affirm that no one understands their pain… no one ever loves someone the way they did… no one’s ever experienced a love like this one. They’re sure that their relationship was special and unique and, therefore, so is their suffering.

In the same way that teens feel so special and unique, they also feel like nothing bad can happen to them. They think the rules don’t apply to them and that they can dodge danger.

So, they dare to take unnecessary risks under the firm belief that there won’t be any negative consequences. They won’t get pregnant… they won’t get into a traffic accident… they’ll never develop an addiction to drugs.

All of these distorted beliefs are typical to the life stage that teens are experiencing. As they develop their own identities and collect experiences, these biases gradually disappear.

At the same time, their way of thinking adjusts more to reality. However, it’s important for the adults in their environment to be aware of the existence of these biases. And this applies especially to their parents.

This way, it will be much easier for parents to comprehend their teens without judging them or blaming them. It allows us to understand them and guide them in a more loving and respectful way. After all, this is just part of the process they’re going through.

Adolescents Acting Out for Attention: 9 Examples
Adolescents acting out for attention is often a sign of communication problems with their parents. The adolescent child wants to be noticed. Read more »
Link copied!
Interesting Articles
Teen behavior
Alcohol Consumption in Teenagers: What You Should Know