The Increase in Cyberbullying Among Adolescents

With the arrival and development of new technology, new types of violence have also come into existence. In fact, there has been an alarming increase in cyberbullying among adolescents in recent years. 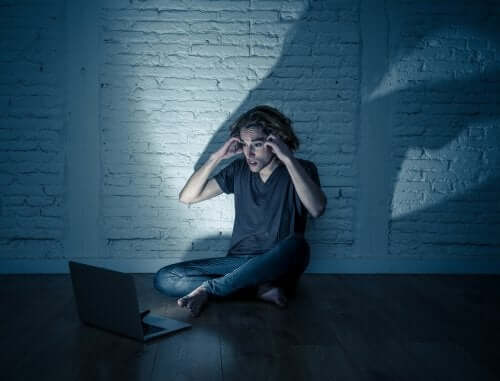 We’ve seen a troubling increase in cyberbullying among adolescents in recent years. In fact, according to the organization Save the Children, cyberbullying is the most common form of violence among teens. In the United States, 36.5% of middle and high schoolers suffered this type of bullying in 2019. But, what’s the explanation behind this data?

The problem of bullying has become all too commonplace. Our society is aware of the importance of preventing and intervening in cases of violence in the classroom… be it physical, verbal, psychological, social, or sexual. But, in this new era of Information and Communication Technology (ICT), we must also take cybernetic violence into consideration.

“Unless and until our society recognizes cyberbullying for what it is, the suffering of thousands of silent victims will continue.

The increase in cyberbullying among adolescents

Cyberbullying consists of repetitive abuse that takes place in the context of new technology – cell phones, social media, etc. The intention behind this abuse is to hurt and humiliate the victim.

Save the Children’s annual report on viral violence sheds light on some interesting information on this subject:

At the same time, this 2019 report registered a total of 529,000 cases of cyberbullying. This demonstrates a remarkable increase in cyberbullying among adolescents… In 2016, an estimated 82,000 minors had suffered this type of violence.

What factors contribute to this increase in cyberbullying

The characteristics of the internet

In order to understand this increase in cyberbullying among teens, there are several things we need to understand. First of all, the use of the internet has become a basic part of everyday life in our society. This is especially true among younger generations. In fact, we know that 94% of children between the ages of 10 and 15 are internet users.

This communication and information tool encompasses the following characteristics:

All of this means that cybernetic violence has repercussions that are greater and much more serious than traditional bullying.

This is because cyberbullying doesn’t take place just within the context of school. Rather, it can occur at any moment on any day and in any situation.

Another factor that explains this increase is that youth experience a sense of impunity when they harass someone from a screen. Teenagers need to understand that online violence, no matter what kind it is, is punishable by law.

At the same time, parents also play a role in the increase in cases of cyberbullying. The existence of a lack of parental control when it comes to the use of new technology is definitely a contributing factor.

Many children use these devices without any type of restrictions. They do so unaware of the risks they expose themselves to just by navigating the internet or creating a profile on social media.

But, obviously, it’s not about prohibiting children from using the internet and cell phones. Rather, adults need to set rules and guidelines regarding their safe use. Therefore, schools and families must take on the responsibility of educating new generations about the problem of cyberbullying and other types of internet crime.

The KiVa Method in the Fight Against Bullying
In an attempt to combat the physical and verbal abuse that children use against each other, the KiVa method has been unveiled internationally. Read more »
Link copied!
Interesting Articles
Teen behavior
Talking to Your Daughter About Bad Sexual Conduct

Adolescence is a complex stage in life that involves all sorts of major changes. Physical, intellectual, social and emotional development…