Many times, putting things off is a sign of perfectionism, fear of failure, and lack of impulse control. Today we'll offer some tips about how to deal with procrastination during adolescence. 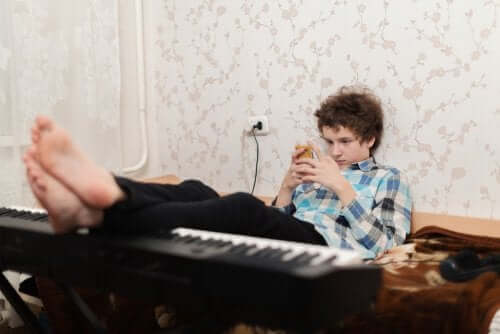 During adolescence, the amount of school work that children must face increases, as well as the level of responsibility they must assume. On occasion, young people may feel overwhelmed, and feel that putting things off is the only way out. Oftentimes, procrastination during adolescence has more to do with emotional factors rather than time management issues.

Procrastination is the habit of postponing activities or situations that require our attention. And, at the same, occupying our time with irrelevant and more pleasant activities. In other words, procrastinating is deciding not to do something even though you know you should. It’s prioritizing short-term comfort over responsibilities.

Despite how things may appear, procrastination during adolescence isn’t about lack of time or time mismanagement. It’s clearly an evasive behavior that has to do with the inability to control one’s impulses and manage one’s negative emotions.

The characteristics of procrastinators

Procrastination during adolescence: The consequences

By procrastinating, adolescents find momentary relief from their negative feelings. However, this behavior leads to considerable consequences.

First of all, having pending and unfinished tasks produces anxiety that grows by the minute. This leads to a sensation of chaos and powerlessness over one’s own life. What’s more, it produces feelings of frustration, of being stuck, and an inability to get everything done.

Depending on what children are procrastinating, it can affect their academic, social, and work life. Putting things off until the last minute will result in unfinished or poorly completed assignments, which will have repercussions in a person’s academic performance.

But procrastination doesn’t only have to do with homework. Teens may also put off important conversations that make them feel uncomfortable. And doing so only wears on these relationships as the pending issue becomes more and more burdensome.

How to avoid procrastination during adolescence

Advice on How to Help Your Child Start Studying Again
Do you need help to know how to encourage your children to start studying again? Well, today's article is sure to be of interest to you. Read more »
Link copied!
Interesting Articles
Teen behavior
Alcohol Consumption in Teenagers: What You Should Know