Why Adolescent Don't Want to Do Chores

Many adolescents "forget" to do to their chores and, as a result, their parents get angry. Today, we want to talk about why adolescents don't want to do chores and what you can do about it. 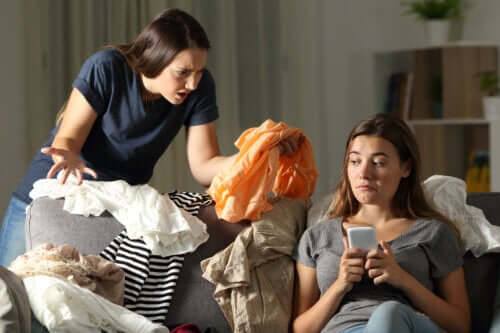 There are some children and teens that are capable of cleaning their rooms without their parents reminding them a million times to do so. They also brush their teeth and wash their hands without needing constant reminders. Preadolescents and adolescents are perfectly capable of doing these things on their own, but often they don’t. Today we’ll talk about why adolescents don’t want to do chores.

Why adolescents don’t want to do chores

“I forgot to do my chores”

Many preadolescents and adolescents constantly tell their parents that they “forgot” to do things. They forgot to hang up their backpacks, to take their dirty dishes to the sink, to tidy up their rooms, to study, etc.

If you suspect that this forgetfulness is a manipulative trick, then you’re likely to experience a series of disconcerting emotions. For example, anger, more anger, and even more anger.

Be careful when your teen complains about chores

Complaining isn’t an appropriate way for your child to communicate with you. Encourage them to stop complaining by telling them to talk in their normal voice. Or, simply refuse to respond when they complain. Later, praise them for talking to you in a responsible manner.

Reward your children when they do their chores. And explain in a kind way why they should do their chores without complaining. Tell them that if they do complain, you don’t listen until they address you more respectfully.

It’s true that some adolescents and preadolescents are very manipulative. However, most are being sincere when they promise to do things in “just a minute” or “next time.”

However, they tend to forget those promises as soon as they make them. And as a result, the dirty dishes remain on the counter, their bedrooms are still a mess, and they didn’t study for their test… again.

It seems respectful to wait for them to finish watching their TV show before insisting. However, unless your children have already demonstrated their ability to keep their promises, allowing them to put things off will only be counterproductive for everyone.

Don’t think that your children are betraying you

It’s easy to feel like your children are betraying you when they promise to do their chores in a minute and then don’t. At the same time, it’s silly to continue to trust a teen that regularly breaks those promises.

If you continue offering your trust rather than dealing with the problem, you’ll only perpetuate the problem. Responsibility is something that adolescents need to learn, but they need a teacher in order to learn it. And that job belongs to you.

In this sense, don’t expect your child to take care of their own responsibilities if you don’t do your own. If you’re constantly leaving your room disheveled… You don’t clean the table after dinner… If your children see how you put off work tasks until the last minute… Then you can’t expect them to be any different.

You’ll also need to be very patient with your children because adolescence is a complicated stage for everyone. They’re looking for their own identity and will try to do things “their own way.” And they’ll try to push the limits and challenge your rules, which is completely normal. But, your attitude throughout this entire process is fundamental.

If you come off as angry or annoyed by the way they do things, you’ll just be offering negative reinforcement. So, patience is essential. Being patient with your children will help you have a better relationship with them. What’s more, they’ll feel like you’re respecting them at all times.

Conclusions regarding why children don’t want to do their chores

When adolescents feel respected, valued, and listened to, they’ll be more likely to do things without needing constant reminders. So, be willing to negotiate and be flexible. But, at the same time, be sure to establish consequences with your children beforehand. That way, they’ll know what you expect of them at all times, as well as what will happen if they don’t practice responsibilities.

Why Aren’t Many Teens Morning People?
Have you ever wondered why there are some teens that are morning people and others that are night people? Read today's article to discover the answer. Read more »
Link copied!
Interesting Articles
Understanding your teen
How to Help a Teenager with Learning Disabilities

For little ones, their parents are like superheroes, incapable of making mistakes and possessing all the answers. The admiration children…