As parents, the way our teenagers behave can lead us to have mistaken beliefs about adolescence, and what they're thinking or feeling, but this behavior is simply part of their development. 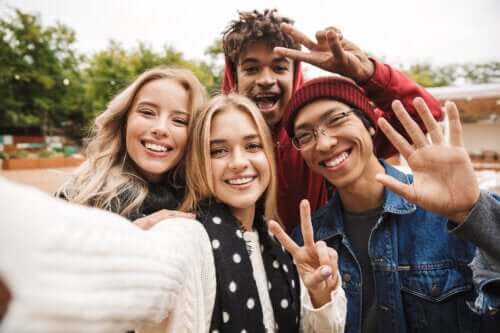 Sometimes, as parents, we don’t know how to interpret our teenagers’ behavior. This is quite normal, as we’re faced with new behavior that we’ve never seen before. This behavior can lead us to have mistaken beliefs about adolescence and what they’re thinking or feeling.

When seeing how our teenagers behave, we shouldn’t be hasty in coming to conclusions. We’re in danger of falling into “interpretative bias,” that is, that we interpret things according to our needs and way of thinking.

In the face of different behavior from our teenagers, we can start to have mistaken beliefs or thoughts about certain aspects of adolescence. Let’s have a look at some examples.

Judging our role as parents based on our teenagers’ behavior

When we start to see that our teenagers spend a lot of time with their friends, we may start to think that they prefer being with them than with us. We may also think that our opinions don’t count because we’re no longer important to them, or that we’ve failed them in some way. We start to wonder whether we’ve made them act in this way. However, nothing could be further from the truth.

We must banish these kinds of conclusions from our thoughts, because our children’s behavior isn’t caused by us, the parents. It’s important that we realize that, at this stage of adolescence, children need to feel accepted by their peer group. It’s quite natural that they’ll want to relate to them also.

During this stage, the so-called “differentiation process” takes place. This means that the teenager will transfer his or her affections to a group that’s a separate entity to their family. They’ll create bonds with people of their own age, and this will help them to form their own personality and identity.

Even if this happens, it doesn’t mean that our child doesn’t want to be with their family. It simply means they need to feel independent from that family nucleus. This distance is necessary and normal for their own development, even if it’s difficult for us, as parents, to accept it.

Just because our teenager isn’t as outwardly loving towards us as they once were doesn’t mean that they don’t love us. This behavior is quite normal at this stage of their development, as children also seek emotional independence from their parents.

Therefore, we must stop reminiscing about how affectionate they used to be, and now they aren’t. Stop thinking “He doesn’t love us as much now” or “She used to hug and kiss us before, and now she doesn’t want to, she must be embarrassed, we’ve lost her love.” If you respect them, you’ll soon notice how that love will show itself again, albeit in different ways.

Believing they aren’t capable of respecting and following the rules, and are just defying you

In adolescence, children seek equality in their relationships with adults. When parents or other adults argue from an authoritarian point of view, then they tend not to accept those arguments. They feel they should be involved in setting those rules and limits.

This doesn’t mean they’re trying to defy or challenge their parents, but simply that they feel the need to give their opinion and oppose the parents’ decisions when something doesn’t seem right. Faced with this situation, it’s normal for parents to feel frustrated, but this shouldn’t prevent us from establishing logical and appropriate limits for our children.

Although parents represent authority, we’re also their security and safety. So, in the face of their refusals and opposition, we mustn’t think that the problem is with us, but, rather, with our teenagers’ for their independence.

Believing that teenagers aren’t ready for the world

It’s completely normal for parents to worry about the safety of their children. No parent wants anything bad to happen to their child. But it’s during adolescence when we worry the most because they go out more, and experience more, and could face certain dangers and risks.

Even so, we, as parents, have to trust them. If we’ve transmitted good values to them, then they’ll know how to make correct decisions when faced with new situations. Above all, it’s essential that we talk to them about the dangers they may encounter, and how they should deal with them in order for them to avoid taking risky or dangerous decisions.

As far as the mistaken beliefs about adolescence are concerned…

As you’ve seen, these mistaken beliefs about adolescence aren’t at all accurate. If we know this, then this can help us, as parents, to deal with them. It’s important that, during the teenage years, our children feel that we understand and respect them. In that way, communication with them will be much easier.

Don’t forget that they’re right in the middle of developing their personality and searching for their identity. That’s why we, as parents, have to help them to manage all those emotions they feel – emotions that, sometimes, they don’t know how to deal with.

Understanding your teen
How to Help a Teenager with Learning Disabilities

For little ones, their parents are like superheroes, incapable of making mistakes and possessing all the answers. The admiration children…