6 Achievements in Your Baby's First Year of Life 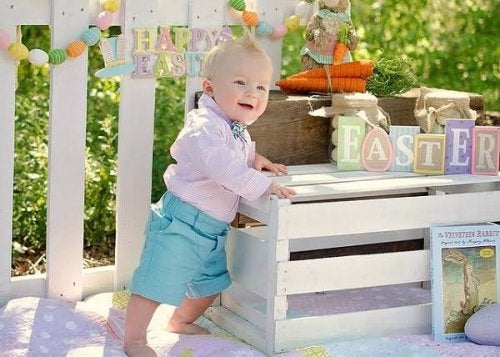 After your baby’s first year of life, you’ll have seen several significant achievements that will make you feel proud.

Thanks to your care and dedication, your little one will reach his first year of life with new behaviors that surprise you.

Each and every day your baby will demonstrate an enormous number of accomplishments that will define their personality.

Undoubtedly, mom and dad will be the main role models that babies will follow during this stage in which everything around them is new. This means they will imitate most of your actions.

Certain indicators will help you know if your baby is developing normally.

In other words, the way in which your child plays, talks, learns and acts offers several clues regarding how your little one is growing.

These signs are known as development indicators, and they allow us to discover important facts about our child’s overall health.

Achievements of a 1-year-old

The first year of a child’s life is full of giant discoveries. During this stage, communication, social interaction and the ability to control their bodies are the three most important areas in which our beautiful little ones should grow.

To give you an idea of the way in which your baby is growing, we’ll discuss the evolution of babies during their first year of life:

During the first weeks of life, your child will adapt to his environment instinctively. For example, your baby will move his eyes toward the light, move his head and open his mouth (suction reflex), open his arms upon hearing loud noises, etc.

Your newborn communicates through crying in order to say that he’s hungry, he feels lonely, or that he is hot or cold.

Some stimuli will make your little one smile, such as seeing mommy. At the same time, your little one will start to emit certain guttural sounds to try to get people’s attention. The presence of others is essential at this point in life.

Your baby now shows interest in more things, and begins to twist his head in the direction of the sounds he hears. He loves visual stimulation. He starts to communicate with babbling noises that make you overflow with love.

Your 4-month-old holds his head up firmly, stares constantly at his hands, laughs often, and doesn’t like to be alone.

The fifth month: Babbling is my specialty

Your tiny tot loves to hear the sound of his own voice and is constantly letting out little noises. He now puts objects in his mouth, laughs at the humor of others, and dislikes it if you stop playing with him.

Your baby can roll over on his own, grasp his bottle between his hands, and show preference for certain people. Also, his teeth are starting to show.

It’s important to keep an eye on him to make sure he doesn’t get close to the edge of the bed where he could fall.

Each baby develops at his or her own pace, so don’t worry about the changes you observe in other babies.

The seventh month: I’m sitting up on my own

Every second that goes by is a new opportunity to learn, given that your child’s muscles are getting stronger.

Your 7-month-old can lift up his torso and remain seated for sometime. He understands what you are saying, his sounds have turned into syllables, and he uses his hands freely.

The eighth month: The feeling of fear

Strangers and new people may cause your child suspicion, unless they approach your baby calmly and speak to him in a soft voice. Your baby expresses his feelings and rolls over from side to side.

Your growing baby will move around by crawling. Of course, this is a process that is different for every child.

Just the same, you can help your child by providing interesting stimulation, such as throwing his toys so that he looks for them.

The tenth month: I’m standing up

Your 10-month-old baby grabs onto any surface in order to stand up; he can pronounce double syllables like “ma-ma” and “da-da.”

He waves with his little hand to greet others; and he loves to hear new sounds (dropping a toy or ripping a magazine).

If you feel like something isn’t right, talk to a trusted pediatrician about the issue

The eleventh month: I’m close to reaching my goal

You and your baby can understand one another better. Your little one says his first words and starts to walk on his own. He understands the phrases “give me” and “put that down.”

Your baby takes his first steps, discovers new ways to play, spends less time napping, has a hard time saying goodbye, has more access to language, and calls things by their name.

These are 6 accomplishments of a 1-year-old baby.

Remember that you can talk to your pediatrician about any situation that seems out of the ordinary for you.

Guide your little one with love at all times. Accompany him, and have fun along with him as he experiences this wonderful life.