Why Do Babies Suddenly Wake Up Crying?

Babies have lots of feelings and sensations. Sometimes, anxiety and nervousness can make babies suddenly wake up crying. Find out more in this article. 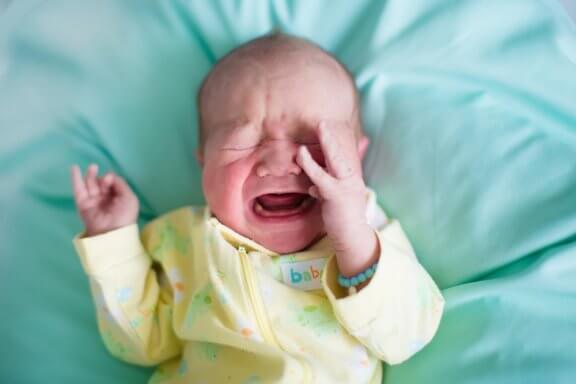 Many parents suffer from insomnia because their babies suddenly wake up crying. Generally, this happens more frequently during the night than during the day because they feel uncomfortable. Crying is the best way for them to communicate that they’re not happy.

However, sometimes it’s clear that babies cry because they want to. They need to get rid of their energy by doing something, because it doesn’t all go to growing and developing.

Sometimes, babies suddenly wake up crying because they want to demand attention for certain needs. On the other hand, they also cry for things that they just want.

Reasons why babies suddenly wake up crying at night

There are many different reasons why babies suddenly wake up crying in the middle of the night. Some of the most common ones are:

In general, babies cry to express that it’s time for them to eat again. Sometimes, babies can cry as often as every two or three hours because they’re hungry.

Uncomfortable in their environment

Babies might suddenly wake up from a nap if they’re uncomfortable. They might be too cold, thirsty, bitten by a bug, among other things. To prevent this, parents should be aware of the conditions their baby sleeps in.

Be careful to make sure that mosquitos don’t bite. Also, make sure there aren’t strong or annoying odors, big gusts of air, or rain. Not only will they cause babies to wake up, but they could also make your baby sick.

Always try to place babies in a good position at bedtime. However, if they’re restless when they sleep, they might suddenly switch positions. Depending on how they move, they might cramp up.

It’s normal for all babies to spit up during their first few months. If it happens while they sleep, they could start choking. As a result, they could suddenly wake up crying because they feel uncomfortable.

Additionally, make sure that if they just ate, they’re sleeping a little elevated. That way, there’s less of a chance that they’ll spit up in bed.

Other reasons why babies suddenly wake up crying

This is very common in babies that have lots of moisture and whose skin gets irritated very easily. If your baby is like this, you should try to get good ventilation in the room. Also make sure your baby is always in fresh clothes.

One of the most common reasons why babies suddenly wake up crying is because they feel uncomfortable wearing clothes that bother them.

Small children tend to outgrow their clothes very quickly since they grow so fast. However, in the eyes of their parents, they’re always the same size. On the contrary, tight clothing can make blood flow harder.

Babies may wake up crying in the middle of the night because they’re sick. If this behavior keeps happening and you don’t know why, it’s important to go to the doctor immediately.

The pediatrician can run tests to rule out other health issues as the reason for the sleep problems.

Nightmares that scare them

It’s very common for babies to wake up in the middle of the night because they had a bad dream. Many babies start crying because they’re scared from the nightmare they just had.

Conclusion on why babies suddenly wake up crying

Not all babies express their emotions or feelings in the same way. Therefore, it’s important for parents to learn to understand their baby’s messages, either through crying or other body language.

What to Do If Your Baby Won’t Stop Crying
When your baby won't stop crying, it's normal to feel quite helpless and frustrated. If that's the case, know that you're not the only one. Read more »
Link copied!
Interesting Articles
My baby won't sleep
Tips to Help Your Baby Sleep Better