You'll likely be amazed by all the changes your baby goes through in his first year of life. In today's article we'll explain everything you should know about this important evolution. 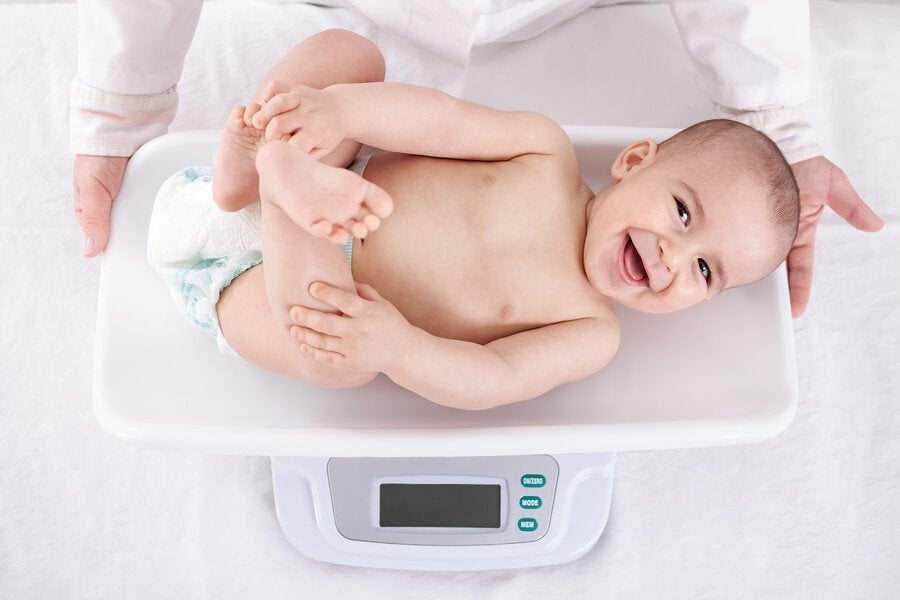 Your baby’s weight gain and growth during his first year of life is undoubtedly incredible. At birth, babies weigh between 6 and 7 pounds on average. Yet after just 12 months, this will have increased to between 22 and 24 pounds.

Babies also experience many physical changes during this period. Although their development is really only just beginning, you’ll be amazed at how rapidly their weight and length will increase.

Taking this into consideration, we’re going to provide detailed information about your baby’s weight gain month by month. We hope this guide will be useful for you.

You’ll also be able to see if the baby’s food intake and general state of health are within the parameters recommended by pediatricians.

Human beings grow more between four months of age and their first year of life than at any other point in their life. From birth until 1 year of age, their weight will have tripled.

However, there are variations month by month and there is no fixed pattern; all babies are different. In fact, during some months, babies can lose weight instead of gaining; this is perfectly normal.

Taking this into account, we’ve decided to illustrate, stage by stage, what is happening with your baby’s weight gain. This way you can have a more accurate idea about how he’s progressing.

The baby’s weight in his first week

In their first few days of life, babies don’t increase in weight; they actually decrease. The weight loss will be around 10% of their original weight. Some parents may get worried by this, but in reality it’s a completely normal situation.

This is due to two main factors: one is the elimination of urine and meconium, the baby’s first excrement that accumulated in your body during pregnancy. The other is that a newborn baby’s stomach only measures about 2 inches. Because of this he can’t eat much at a time.

Babies will usually reach their birth weight again by day 15. From then on, it will progressively increase.

What happens in the first month?

During the first month of life, a baby’s weight gain is estimated at 1 ounce per day. This is achieved thanks to babies’ stomachs gradually expanding as they feed more and more. This in turn causes an increase in breast milk production.

The weekly weight increases between the second and the fifth month

From the second month of life, babies tend to gain about 6 ounces per week. This is just under 1 ounce a day, or about 1 lb 6 ounces per month. These months are very important, because babies rely exclusively on breast milk or formula milk.

After six months the baby begins to accumulate fat

The sixth month of a baby’s life can be one of the most beautiful in terms of physical appearance. This is partly due to the fact that from around the fifth month, children begin to receive more calories. By six months of age, they’ll now have their maximum percentage of fat.

Again, this is completely normal and shows us that babies are being fed correctly, and according to their own individual needs. At this time children will also begin to receive new food that will complement their diet. As for their weight, they’ll gain around 1 lb a month until they’re 9 months old.

Between nine months and their first birthday

Almost as if they’re getting ready for the photos on their first birthday, babies will naturally reduce this weight increase. At this stage, children will gain only around 7 to 9 ounces per month. In spite of that, they’ll have completed a very successful first year, and will have tripled in weight compared to the first day.

Last of all, remember that proper nutrition, good rest and all the love you have to offer your baby will be the main factors in their growth. If you’re worried that their weight is either not increasing enough, or increasing too much, then you should contact your pediatrician as soon as possible.