Episodic Memory: When does your child start to create memories? 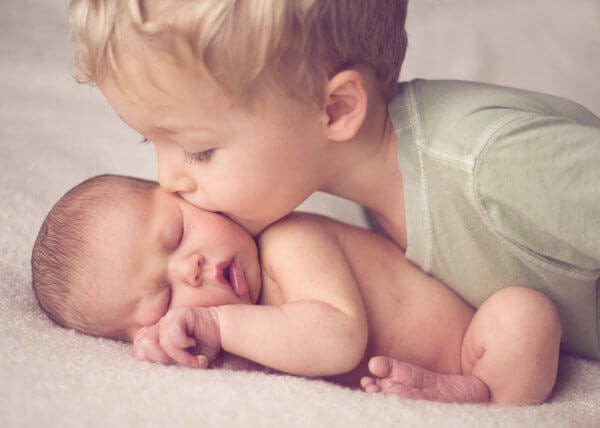 Very few people have clear memories of things that happened when they were only a few months old. Even memories from our first and second year of life are hard to come by.

In fact, our earliest memories are, on average, from around 3 years and 4 months of age. One of the reasons for this is that our brain hadn’t developed the ability to store autobiographical memories before that.

Some people claim to have blurry memories of when they were very small. Some even go so far as to say they have mental images of being in their cribs. But experts are skeptical about those memories from early infancy. Though blurry, they may actually be based on stories they were told by their mothers about their childhood.

That mental image, according to science, transforms into something you experience as if it were a blurry memory. So, most of the time, they do not actually represent real memories.

We know this to be true because episodic memory forms sometime after 3 years of age. Episodic memory is the memory that stores autobiographical events. It contains data about specific moments, places, associated emotions, and other details that enrich our recollections.

Your baby’s memories are formed through a complex process

From birth until age 3, a child’s brain goes through a period of rapid development. Children’s brains, during the first years of life, create a massive amount of new connections. Scientists have even proven that the brain of a 1-year-old has more connections than at any other point in life.

However, that brain, once so prolific in connections, will change over time. According to scientist Catherine Loveday of Westminster University, our brains must “prune” themselves. Getting rid of some of these connections is a necessary activity for brain function. This brain process is similar to pruning a tree, and through it, small children lose their early memories.

Some theories sustain that the development of language contributes greatly to the mind’s ability to create memories. “We remember that which has been given a name.”

Recent research studies made this affirmation regarding the memories of children. Scientists add that episodic memory can’t store memories of things that involve particular concepts that a child doesn’t yet grasp.

It is difficult for our brains to codify a memory before we have a linguistic concept for each detail. In other words, a child can’t record an event in her episodic memory if she hasn’t learned how to speak yet. Speaking allows the child to codify each detail and emotion by name.
Another interesting fact is that the development of the hippocampus is key in codifying and storing episodic memories. The hippocampus continues to develop throughout early infancy. This explains why children cannot store early memores of their lives. Their brain simply isn’t ready yet.

It is unknown exactly why some memories are erased. However, some researchers affirm that this occurs because the brains of youngsters are still very plastic and continuously rearranging themselves.

Through this process, memories are erased to make space for new learning. And, specialists insist, children begin to develop the ability to record permanent memories at around age three.

Structured language is also among those capacites that your child needs to learn in order to store memories. In order to remember an event clearly, children need a narrative structure. They need to be able to describe their experiences and store them coherently.

Children also need the ability to interpret their experiences. This occurs when we recall an event and interpret what happened. At this age, your child is already beginning to acquire the ability to differentiate between the usual and the out of the ordinary.

You can help your child better affix his memories

You already know that episodic memory requires a certain level of maturity in order to store information. But there are also techniques that allow you to help your baby affix his memories.

For example, as memories are almost always associated with emotions, you can offer your baby a variety of experiences. To remember, children need to explore, touch, feel… In other words, to live out the events. Simply telling them that things exist is not enough.

Stimulating your child’s senses is another way to help your child remember moments with more intensity. So, when you’re telling your child about a certain moment, you can also show him pictures or videos of the event. You can also incorporate smells or flavors.

Visual aids are one of the best ways to stimulate your child. It is much easier for them to remember a narration if it goes along with an image.

It’s also helpful to converse with your child about things that occur. Conversation not only helps children to affix their memores, but also to learn to express their emotions.

Dialogue is useful for explaining to your child that different feelings are normal. You can talk to your child about his sadness, fear, pain, etc. And in doing so, you will be helping him create memories in a positive way.

Link copied!
Interesting Articles
My baby won't sleep
Your Baby's First 6 Months: How to Sleep Well as a Family