Four Facts About Your Baby's Breathing

The rapid breathing of babies in their first year can be worrying for parents. Find out what's normal and what isn't about this subject. 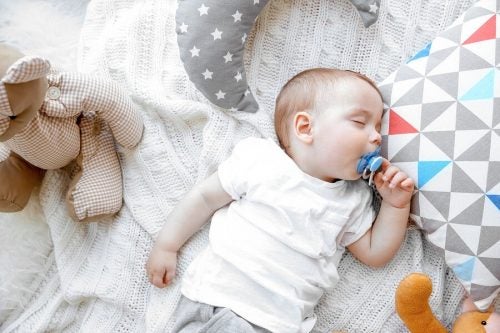 Parents often worry about their baby’s breathing, especially when their newborn is just a few days or months old. When parents notice the movements of their babies’ chest, it’s likely for them to think that they’re agitated or that something isn’t working well in their lungs.

However, there are certain characteristics that distinguish newborns’ respiratory systems, which are still small and a little immature. It will be this way until they reach their second month of age.

Taking this into consideration, don’t miss out on the interesting facts that we’ll discuss to ensure that you know everything about this topic and are able to distinguish between a real problem and a naturally occurring condition in newborns.

Facts about your baby’s breathing

Babies take approximately 40 to 60 breaths per minute. This is directly reflected in the movement of their chest, which has little adipose tissue which makes the accelerated breathing movements more noticeable.

To give you a better idea, if a newborn takes 60 breaths per minute, an adult only takes 20. That’s not all, a baby’s breathing is also characterized by rhythmic changes. Sometimes they’re irregular and nasal. Babies can even snore, sigh, and make particular noises.

For these reasons, you should be up to date on the following facts, so pay attention:

Newborn babies breathe with unstable rhythmic dynamics. One moment they can take in air deeply and in an accelerated way, and in a few minutes, change to slow and short breaths.

Since newborns cry frequently, this will also affect the changes in their breathing, which quickly returns to a slow pace when they stop crying.

It should be noted that premature babies are the most prone to irregular breathing, as a result of their lung immaturity.

2. Babies only breathe through their noses

Another interesting fact about how babies breathe is that they only take in air through the nose. This is because their soft palate is very close to the epiglottis, which doesn’t allow oxygen to pass through the mouth. This condition is only present until children reach six months of age.

“There are certain characteristics that distinguish newborns’ respiratory systems, which are still small and a little immature. It will be this way until they reach their second month of age.”

Another common action related to a baby’s breathing is frequent snoring. In regards to this issue, we must emphasize that the culprits are nasal secretions, which are common in babies. They’re a result of crying or frequent colds to which they’re exposed.

You should pay special attention to snoring. If your child doesn’t have a cold or mucus and snores a lot, you should consult with your pediatrician. It could be sleep apnea syndrome.

To identify if your child may be suffering from this condition, you should examine if your baby sweats a lot when sleeping at night. Also check if the child is uncomfortable or sleeps in strange positions and if breathing stops for a few seconds.

Remember that your baby’s life may be at risk if breathing stops for more than 20 seconds. This can trigger the so-called sudden death syndrome in children, which is caused by not breathing, usually when sleeping face-up during the night.

Although it doesn’t seem normal, newborns frequently pause their breathing. As we previously explained, it can be risky if the pause is longer than 20 seconds.

However, during the first month of age, babies usually stop breathing between 5 and 10 seconds and automatically resume the respiratory cycle without affecting their cardiovascular system.

To conclude, we want you to know which signals aren’t included and what is considered a normal situation regarding your baby’s breathing:

Ultimately, if it’s within your means, it’s good to learn about first aid and cardiopulmonary resuscitation. In case your baby stops breathing for more than 30 seconds and you feel the child is unresponsive, this can be a very valuable tool to solve the emergency.

What do you need to know?
CPR in Babies and Infants: What You Should Know

What do you need to know?
Emotional Development in Babies: What You Should Know

Emotional development in babies is a process that begins at birth. Thus, the first emotional relationships and bonds will determine…

What do you need to know?
The Development of Newborn Senses

The development of newborn senses is a maturational process that begins at birth. Babies acquire new perceptions through sight, hearing,…