A Documentary About Four Babies from Very Different Cultures

Bayar, Mari, Ponijao and Hattie are 4 babies from very different cultures and parts of the world, and they're the stars of the documentary Babies. 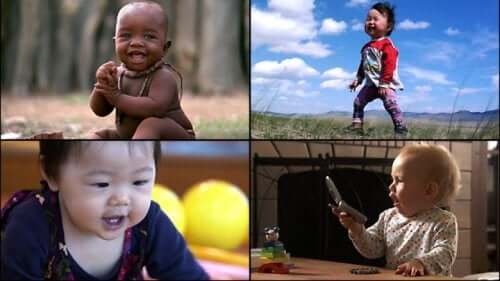 Babies, a documentary directed by Thomas Balmes, follows the lives of four babies from very different cultures. The film introduces us to Ponijao, Hattie, Bayar, and Mari as they’re born, play, cry and grow… Each in a culture that’s very different from the others.

The documentary takes us on a journey to four very different corners of the Earth. First, we have Ponijao, a baby from the Himba ethnic group, born in Opuwo, Namibia. Then we have Bayar, another baby living near Bayanchandmam, Mongolia. Balmes also takes us to Tokyo, the city where we meet a Japanese baby by the name of Mari. And finally, and a little closer to home, we have Hattie, who was born in San Francisco, California.

What’s birth like for four babies from very different cultures?

In one way or another, preparing to give birth is something that takes place in all human communities. Of course, the exact details vary greatly from one place to another. In each of the 4 cultures that the documentary shows us, the mothers prepare to give birth as if it were a sort of ritual.

In Namibia, the mothers cover their bellies with a red butter-based ointment that’s very characteristic of the Himba people. This ointment is used in daily grooming and as a protection against the sun and insects. At the same time, Bayar’s mother attends some classes before giving birth.

When it comes to giving birth, we observe great differences between the four cultures. For example, the first scene shows Hattie in the hospital, connected to numerous cables. Ponijao, on the other hand, is born in the huts of her village.

In the case of the Mongolian baby, the parents return home on a motorcycle after Bayar’s birth. The mother sits behind the father with her newborn cradled in her arms.

Without a doubt, postpartum is a stage that mothers spend very close to their babies. But it also involves the company of others. Babies shows how the mothers of Hattie and Mari attend postpartum classes with other mothers and babies. Ponijao, on the other hand, is constantly with her mother and the rest of the Himba mothers and babies.

And then we have Bayarjagal, a baby that sometimes shows up in scenes all by himself. He’s constantly wrapped in blankets, lying on a bed. Perhaps, given the large workload on his parents’ shoulders, he must spend a lot of time alone. And being wrapped up is a way to guarantee his safety.

Social support of the mothers of these four babies

The mother of Ponijao, the African baby, is the one that appears to have the most companionship. Essentially, her company consists of other women and children. As for the mothers from the other three cultures, we mostly see them attending family meals.

At the same time, Hattie and her mother, as well as Mari and her mother, attend gatherings in the homes of friends and family. This is their way of enjoying motherhood together with other mothers and babies.

The presence and absence of the fathers of these four babies

This is one of the aspects where we can best observe the differences between one culture and another. On the one hand, the father of Ponijao doesn’t appear in a single scene throughout the entire documentary.

And on the other end of the spectrum, Hattie’s father appears almost as much as her mother. What’s more, he takes on an active role in her upbringing, attending psychomotor stimulation classes along with Hattie’s mom.

As for the family from Mongolia, the father appears in some scenes, but only in family gatherings and never alone with Bayar. And finally, the father of the Japanese baby, Mari, appears caring for her in their home.

Exploration and freedom of movement in Babies

Ponijao, the African baby, is the only child that has full freedom of movement throughout the documentary. Bayar, the Mongolian child, goes from absolutely restricted movement to limitless freedom. By the time he’s a few months old, he is completely free to explore and move about as he pleases.

Hattie and Mari, however, appear constantly in their strollers or in their mothers’ arms. Only when they are at home do they have the option of moving about on their own. In fact, it seems not even Hattie’s home is safe enough for her, and her movement is restricted there as well.

Babies, the similarities within the differences

An especially moving moment is when consecutive scenes of the babies crawling appear. They do so in very different settings and landscapes and their cultures are all very different from one another. But when they crawl, the differences seem to disappear. All that remains is the universality of the growth of a human baby.

In the final scene of the documentary, we see Bayar standing up for the first time. This demonstrates that, while some take more or less time to talk or walk, sooner or later, they all do.

Babies shows us that, even though some grow up surrounded by nature and others in large urban areas, all babies laugh and cry. All babies fight with their siblings, feel curious about their environment, and smile when they see their mother’s face.

Cultural diversity is fascinating and enriching. It’s a mistake to judge other cultures based on our own viewpoints and contexts. Babies, through something as pure as childhood, teaches us that all cultures are valuable and worthy of respect.

“Culturally we know what is the right way to eat, to think, to write, to do everything. It is crucial to change perspectives and to realize that there are many ways of doing things.”

The Delivery Process in Other Cultures
The birth of a baby is a blessing. In any culture, this brings the mother joy. However, the delivery process in other cultures is very different.  Read more »
Link copied!
Interesting Articles
Breastfeeding and baby formula
What Should Moms Eat While Breastfeeding?