Teaching Your Child to Respect Diversity 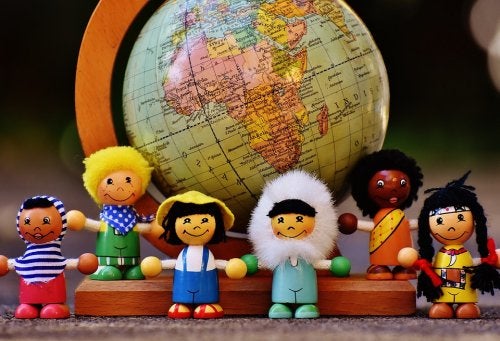 It’s important to teach our children to respect diversity, which means accepting that we live in a world in which there are all kinds of ethnicities, religions, beliefs, physical characteristics, feelings, values and actions.

No one is the same as anyone else, and that makes the human species an amalgam in which we all come together while simultaneously maintaining our individuality.

To teach your child to respect differences, first you must educate him on the basis of equality. Erase all stereotyped feelings from him and teach him how to be tolerant of others’ faults.

You must convey to him that we are all the same because we all belong to the human race, whether we are white, black, Indian …

How to Teach a Child to Respect Diversity

Show your child how to value and appreciate those around him by telling him how to fight against sexism and to defend equality between the sexes, regardless of the role each person has to play (according to the dogmas of the past) or their sexual orientation.

You can also do it by showing him how to establish friendships with people from different cultures or religions, or by talking about how you respect someone who has different beliefs.

Your child must learn to accept his peers, whether they are ugly or cute, skinny or fat, sexy or not… because in reality, there should be no such conditions.

All men are the same in at least one aspect: their desire to be different.

The establishment of these and many of the other categories that exist in the world today are dictated by the people in power, who are considered perfect.

Equal treatment based on respect for diversity and tolerance of differences is the platform that sustains, or should sustain, human relationships.

If you have already begun to teach your child to respect diversity, talking about non-discrimination is the next step.

Teach him to reject the discrimination that enraptures some human beings and excludes many, such as the submission of one sex to another or differential treatment.

No one is better or worse because they were born in this or that country or because they practice a certain religion. Just because someone is born a woman does not mean she has to bow her head to a man, who is not there to keep it down.

We all have the right to enjoy the same benefits, opportunities, joys …

To teach a child to respect diversity, equality and non-discrimination, you should teach him or her how to think, feel and act in an inclusive way.

Teaching Your Child to Respect Diversity

After having talked about respect for diversity, equality, tolerance, non-discrimination and inclusion, it is important to comment on what respect actually means.

Even when you teach your child thousands of concepts that deal with inclusion, it does very little unless he understands what the word “respect” means.

Respect is not blind obedience, submission or fear … it is cordiality, harmony and balance in human relationships. When people treat each other with respect, they accept each other despite their differences.

Teach your child that the only way to gain the respect of others is to give respect in the first place.

Your child needs to learn that respect does not mean he stops defending his opinion, tastes, beliefs and feelings, nor does he change them to appease others.

Children must understand that differences can be treated with respect. In fact, when there are differences and both parties are respected, mutual agreement can be reached without inequality, lack of tolerance, disrespect and discrimination.

So when you talk to your child about what it means to respect diversity, teach him or her about the word “respect” as well.