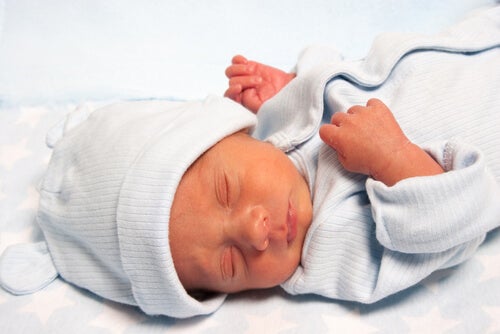 Health problems in premature babies are more common than in babies who remain in the womb during the entire gestation cycle. Being born before the 37th week of gestation sometimes involves complications.

Premature babies require special care because their organs aren’t mature enough yet. For this reason, they may present problems that affect their health in the short, medium and long term.

A preterm birth can be triggered by many causes: an infection, stress, an accident, a major blow or the consumption of alcohol, among others.

Next, we’ll provide a list of the most common health problems in premature babies.

In these cases, the main complications affect the brain and lungs of the baby. These are the most frequent:

Hyaline membrane disease is a condition that affects newborns, especially premature babies. It manifests mainly as respiratory failure (dyspnea) and blue discoloration of the skin and mucous membranes (cyanosis).

This disease can progress to bronchopulmonary dysplasia, which is a chronic lung disease. In addition, it produces the appearance of fibrosis in the child’s lungs, which causes respiratory failure.

This is a cardiac anomaly that causes breathing difficulties in premature babies. The arterial duct is a channel located between the pulmonary artery and the aorta. It’s present in all newborns, but it’s likely to disappear quickly.

Generally, this channel closes spontaneously during the first hours of life. In some premature babies, this channel may remain open longer, causing difficulty breathing.

This is a term that defines respiratory arrest in babies for at least 20 seconds. All babies can experience this problem, but it’s more common in babies who are born prematurely.

There may be a decrease in heart rate after apnea. When the breathing rate slows down, the heart rate also decreases.

Babies are the buds of life ready to bloom like a flower to refresh humanity.

Premature babies have difficulty suckling and swallowing, and sometimes they’re totally unable to do so. In these cases, the digestive system cannot assimilate the nutrients that are essential for the baby’s body.

However, proper nutrition in the little one is essential to help him grow healthy and sufficiently strengthen his body.

A premature newborn can have digestive disorders. Necrotising enterocolitis is the most frequent digestive emergency in newborns. It’s a digestive disease related to immaturity and frailty.

It’s during the last trimester of pregnancy that the brain develops the most. If a baby is born early, there may be complications such as intraventricular hemorrhage and periventricular leukomalacia.

With regard to the intraventricular hemorrhage, it’s one of the most worrying health problems in premature babies. This bleeding occurs because the brain is very immature and, consequently, fragile blood vessels easily break.

If it’s intense, it can cause severe problems and even death, which occurs in a third of premature babies who suffer from it.

Periventricular leukomalacia is a predominant type of brain injury. In this case, the brain tissue is damaged and can affect the nerve cells that control the baby’s movements. This can lead to motor disabilities, such as cerebral palsy.

4. Complications related to the liver

When a baby is born, even at the correct time, the liver destroys red blood cells, and this destruction releases a yellow pigment called bilirubin. The problem is that a baby’s liver can’t easily transform it, and it will accumulate. This is called physiological jaundice.

Keep in mind that the intensity will vary from one baby to another. The bilirubin residues will most often be eliminated through the feces and also through the baby’s skin, often giving it a yellowish color.

Because of these possible complications, mothers of premature children are often worried and stressed.