The Pros and Cons of Infant Circumcision

With prior authorization from parents, who are responsible for this decision, many hospitals circumcise baby boys just hours after birth. What are the advantages and disadvantages of this practice? 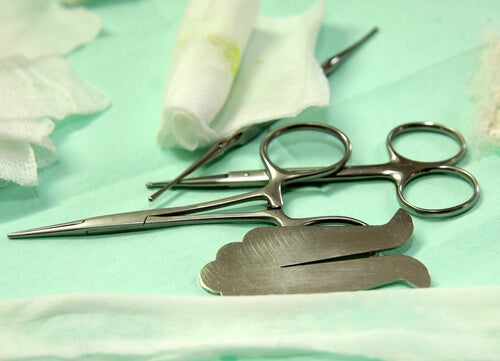 What is infant circumcision? Without a doubt, learning more about the procedure will help you understand the differing motives for this procedure.

To this day, many parents choose to circumcise their children due to medical or hygienic reasons. Other parents do so because of religious reasons, or simple tradition. At the same time, there are parents who won’t even consider circumcision.

Circumcision is a surgical procedure that is most commonly performed on babies. It involves cutting the precipice (the skin that covers the tip of the penis) and exposing the underlying gland. For many, this is a controversial procedure.

The most common time period for circumcision is when a baby boy is 2 days old. However, Jews and Muslims perform this procedure when babies are 8 days old.

It usually causes a mild hemorrhage in children. However, it doesn’t require sutures. Rather, the wound heals on its own within 7 to 10 days, using a bandage.

Circumcision in the operating room

If you’re considering circumcising your son for medical reasons (such as phimosis), knowing what the procedure in the operating room is like will make you more comfortable.

It’s important to know that, while this is a controversial and elective surgery, it’s also simple. It takes very little time to perform. The circumcision procedure lasts between 10 or 20 minutes or, in most cases, an hour.

It all begins with a definitive decision between you and your partner to circumcise your child.

Once you’re sure, you’ll need to sign an authorization that expresses your consent of the procedure. By signing the form, you demonstrate that you’re conscious of the procedure and its risks.

There are hospitals and clinics that allow parents to be present during the operation. You should talk to your doctor beforehand to find out for sure if this is an option.

In general, an obstetrician will be the person to perform the procedure. However, different surgeons specialized in pediatrics can also perform infant circumcision.

During the operation, medical staff will first make sure to keep your baby from feeling any pain. In general, the procedure involves general anesthesia.

In some cases, doctors use a tylenol suppository to prevent babies from experiencing discomfort. The effect can last for hours.

Then, in a question of minutes, the surgeon will cut your baby’s precipice – a very simple task. There are different techniques for this, including the Plastibell, the Gomco method and the Mogen method.

Once the surgery is over, surgical staff will apply vaseline to your child’s penis and cover the area with gauze. This will help avoid discomfort and keep the wound from rubbing against your baby’s diaper.

What’s great about this surgery is that it’s so simple. Your baby can go home the same day – there’s no need for further hospitalization.

“Circumcision doesn’t require sutures; the wound heals on its own within 7 to 10 days, using a bandage”

While it may seem strange, infant circumcision offers a variety of advantages in the long run, though they aren’t scientifically significant. Below is a list of these benefits:

Just like any surgical procedure, there are disadvantages to this operation. The negative consequences of circumcision in baby boys are very infrequent. They include the following:

Without a doubt, infant circumcision in baby boys is one of the most controversial surgeries today. While the advantages aren’t significant, they still exist. Just the same, the final decision rests in the hands of the parents.