How Does the Name You Choose Influence Your Child?

Before choosing a name for your baby, it's important to keep in mind that our names do influence us in certain ways; they form our personality, future, identity... 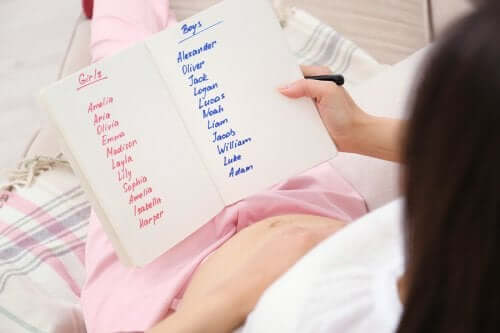 Choosing a name for our children isn’t something that we should take lightly. You might not believe it, but the name you choose for your little one may actually influence his or her personality.

In this article, we’ll tell you how the name you choose may influence your child. Keep this in mind when making a decision that will last a lifetime.

How the name you choose influences your child

Our personality is shaped by different factors, such as the type of education we receive and how present our parents were in our childhood. It’s also constituted long before that, when they chose our names.

For many couples, reaching an agreement about what to name the children will generate fights, arguments, and several hours of negotiations. However, it’s fundamental to go through this situation if the result is to find the perfect name for your baby who is about to come into the world.

A name is the first legacy that our parents give us; that which we receive long before we’re born or right after being born. It’s something so important that it gives us an identity and sets us apart from everyone else.

In many cultures, parents or grandparents wait for the baby to be born and, after a few days, decide on a name according to the qualities they see in him or her. That doesn’t happen in the West, where parents choose a name, in most cases, according to their taste or liking.

Of course, all parents want their children to grow up well, develop properly, fulfil their dreams, and be happy. Hence, we reiterate that choosing a name is very important.

How the name you choose influences your child: traditions and confusion

We carry our name for our entire life. It’s not a word that we bear for a time and then discard it. A common mistake is to follow trends, fanaticism towards certain characters, or wanting to be the most original and exclusive by giving our children foreign names or ones that are impossible to pronounce.

It’s very clear that choosing the name of a child isn’t a simple task. However, it’s essential that you take the time to think and analyze it very well. Consider that your baby won’t only carry it as a child, but also as an adult and elder.

When deciding what to name our children, these are the most common actions that can influence their personalities in the future:

Frequent or popular names can be very nice, but at the same time, can complicate certain situations. If there are other children in kindergarten who have the same name as your child, the teachers will have to identify them another way; for example, with their last name or by some nickname.

It’s a tradition to name children after their ancestors, but this also has consequences. On the one hand, the children won’t feel that they’re unique and then, when they grow up, they’ll fall into the typical dilemma: “Father or son?” when someone calls looking for them or sends a letter.

You should also be careful when naming a child after someone who is deceased. While it may be an excellent way to honor those who are no longer with us, it’s important not to compare or pass all the burden of that exceptional person to the child.

A name is so important that it gives us an identity and sets us apart from everyone else.

Sometimes, foreign names don’t end up being the best alternative. Not only because they don’t combine well with the surname, but the children will also spend their lives spelling or writing it down for others to understand.

The same thing happens with very original or extravagant names; they’re difficult to pronounce or include unconventional letters from the alphabet (such as k, h, z, w, etc).

There’s nothing wrong with picking a compound name for a child, such as John Paul, Billy Joe, or Mary Kate. The problem is that you’ll inevitably have to shorten it or look for a nickname. This may influence their character or personality in the long run.

5. Name with a suffix

It’s nice when they’re babies, but when they grow up, it won’t look so good. Those names that end with a diminutive (y) can become a nuisance in the future. Suppose that your child chooses a profession that requires a degree of seriousness; some names may be occasionally awkward.

Your children won’t be the only ones with that name since they’ll belong to a generation of “baby names.” However, it’s always better if we can call them as adults the same way we did when they were children.

In short, names are a complex issue, which deserves a lot of debate from parents. Beyond the issues mentioned here, you should consider that there are no correct or wrong options. As long as you provide affection and love, the child will grow happy and healthy.

Are There Prohibited Baby Names?
Do you plan on naming your baby something more unconventional? Keep in mind that there are prohibited baby names you should stay away from. Read more »
Link copied!
Interesting Articles
Breastfeeding and baby formula
What Should Moms Eat While Breastfeeding?