The Importance of the Neck Reflex during a Baby's Development 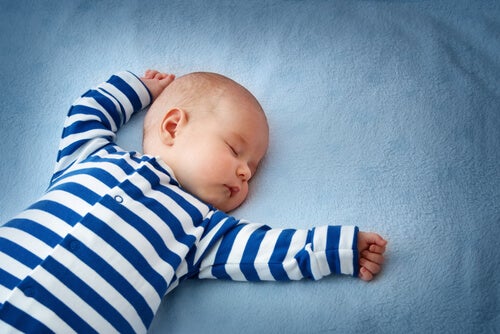 A baby’s reflexes are known as involuntary automated responses to different stimuli. One of the most important is the neck reflex.

Knowing about it will help you understand every posture and reaction that your child makes.

One of the first aspects that pediatricians focus on at the moment of birth are the baby’s reflexes. A baby’s control over their body will depend on their ability to adapt to their environment.

What is the neck reflex?

The neck reflex, also known as the tonic neck reflex, is observed when a relaxed baby turns their face to one side while stretching out their arm.

The other arm remains flexed at the elbow, which gives it the appearance of a defense stature. Pediatricians call it the fencing position.

It can be noted that when a baby is performing this reflex, the arm which is in the direction where the child looks, will be stretched out and the palm will remain open.

In the other arm, which is contracted, the palm will form a fist. This involuntary reflex can be observed on both sides of the baby’s body.

There are two types of neck reflexes:

Main characteristics of the neck reflex

Here’s a summary of the general aspects of this automated response:

Difficulty in the proper integration of this reflex can result in problems in a baby’s gross and fine motor development, laterality and vision.

That’s why it’s important to let them experience it properly without accelerating the crawling or walking process.

Benefits of the neck reflex

One of the most important benefits of the neck reflex has to do with the preparation for crawling. Here are some other benefits:

The neck reflex is undeniably essential for babies, and it begins to disappear as they start walking.

Signs that the neck reflex is still active

One of the main functions of reflexes and especially the neck reflex is to allow the development of specific patterns in accordance to the baby’s age.

If the reflex remains active, it will serve as a symptom of the immaturity of their nervous system. This will affect the development of common functions.

The signs that neck reflexes are still active are:

In conclusion, the neck reflex is necessary for your child’s development.

Help them go through all of the stages of their development with love and care. You should also know about each and every aspect of their growth.

Illnesses in babies
Eczema in Babies: Characteristics and Treatment

Babies
The Amazing Changes Babies Go Through by Age 2