In today's article, we'll talk about the most prominent theories that explain emotional development in children. 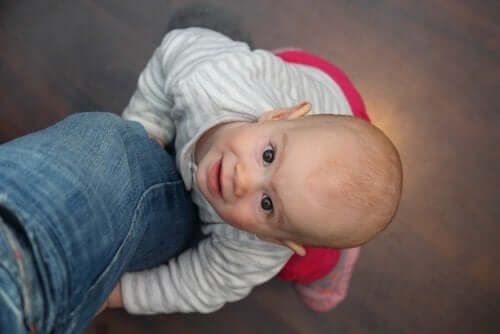 There are many authors that have studied and tried to provide explanations for the evolution and development of human beings. In today’s article, we want to present the most prominent authors who established theories that explain emotional development and their authors.

Children are born with a series of behaviors: Suckling, smiling, crying… The purpose of these behaviors is to produce certain reactions from their mothers or other caregivers. To be more specific, these behaviors help them maintain their caregivers’ proximity and build emotional bonds. In short, these innate conducts are a baby’s first emotional manifestations.

Several authors have observed and analyzed the changes that children experience over the course of their first years of life. And all of these authors affirm that establishing emotional bonds since birth is of vital importance. These first bonds and their quality will determine children’s emotional development and evolution.

Their research has been gathered together as the explanatory theories regarding emotional development. Below, we’ll present some of the most influential.

Bowlby, a psychiatrist and psychoanalyst from London, developed the theory of attachment. With his investigations, he demonstrated the importance of creating safe emotional bonds between their mothers or caregivers, given that it’s a fundamental human need.

Therefore, the basis of this theory is that the state of safety or anxiety that children experience is determined by the response of the adult with whom a child establishes an emotional bond. This emotional bond evolves as the child advances in his or her development.

The phases of emotional development according to Bowlby

During this phase, babies respond to stimuli by means of innate reflex responses (smiling, crying, glances, etc). These reflexes are an attempt to attract the attention of their caregivers. While they’ve yet to establish proper attachment, they do display preference toward the voice of their mothers (or caregivers) over the voice of others.

The emotional bond between mother and child is evident. During this phase, babies display anxiety and anger regarding separation from their mothers or main caregivers. Around the age of 8 months, babies begin to reject other individuals in their environment.

In the same way, they only calm down in the presence and comfort of their mothers. Therefore, during this phase, they focus their efforts on attracting the attention and presence of their moms.

During this final stage, language and the ability of mental representation appear. With this, children are able to anticipate and predict the return of their mothers during their absence. As a result, their separation anxiety reduces. Little ones understand that their mothers will be back at any moment.

Once these phases are complete, children will have established a sufficiently solid bond. Therefore, they’ll no longer need to search continuously for their mothers, because they know she’ll appear when they need her.

Emotional development according to Jean Piaget

Both developments – cognitive and emotional – serve to adapt to the environment. What’s more, both advance from egocentrism to socialization.

The stages of emotional development according to Piaget

Emotions and intelligence manifest themselves in the desires of children to explore, manipulate, and experiment. They look for things they like and reject things that they find displeasing. And they begin to relate with their environment and show their first displays of affection.

Here, children develop the ability of representation, meaning they’re able to think symbolically. This thinking is intuitive or, in other words, based on emotions and feelings. At this point, children are unable to adopt the points of view of others (egocentrism).

Language acquisition and the strengthening of language allows children to express their emotions and feelings. Therefore, their first feelings of sympathy or dislike toward other people.

At this time, logical thought appears, although children can only apply it to concrete objects. Also, during this stage, children are now able to consider other points of view. And, what’s more, they have the emotional capacity to differentiate between their needs and the purpose behind those needs; between desires and duties.

Social relationships begin to have greater importance and, little by little, children develop their personalities.

This stage represents the highest level of cognitive development in children. Emotional life is affirmed by the double conquest of their personality and their insertion into adult society. Adolescents are aware of their social nature and of their need for care and affection from others.

Doctor, psychologist, and pedagogue, Henri Wallon dedicated his like to understanding child psychology. Wallon claimed that children are social beings from the time they’re born. And, therefore, the key to their development is interaction with others.

According to Wallon, several aspects should come together for a child’s development, including motor, emotional, cognitive, and psychomotor aspects. All of them are important for the development of emotions, perception, thought, and language.

At the same time, Wallon focused on four factors that explain the psychological evaluation of children and are the building blocks of their personality. These four factors are emotions, others, movement, and surroundings, which can be physical, biological, and social.

The stage of emotional development according to Wallon

Babies show their emotions in order to satisfy their basic needs and, by doing so, build effective symbiosis. With the objective of satisfying these needs, they establish emotional communication with their caregivers.

Here, brain maturity takes place and, thanks to this maturity, babies go from being biological beings to being social beings. They seek the presence of their caregivers, which, in and of itself, implies a need.

This is a very important period in the reinforcement and construction of one’s self, of one’s personality. During this stage, there’s a great need for attention and affection from adults.

This stage is characterized by a contradiction between what children know and what they desire to know. Conflicts, ambivalent emotions, and imbalances arise on an emotional level.

For Freud, the experiences that we have during early childhood can determine our adult personality. The author points out that socio-affective development can be synthesized in three points: Emotional bonding between mother and child, psychosexual development, and social and moral development.

To Freud, the early relationship between children and their mothers is a determining factor in their later socio-affective development. So, the father of psychoanalysis suggests three basic assumptions regarding the emotional development of individuals.

Conclusions regarding the theories that explain emotional development in children

Of all the above theories that explain emotional development, the one that has had the most repercussions is John’s Bowlby’s attachment theory. Today, we’re aware of the importance of the emotional bonds between children and their mothers when it comes to healthy social, emotional, and cognitive development.

5 Jean Piaget Quotes About Children
These Jean Piaget quotes remind us of the importance of children’s natural development through the legacy of one of the most renowned child psychologists. Read more »
Link copied!
Interesting Articles
What do you need to know?
How to Respond to Drowning in Children