Third Month of a Baby's Life: Movement and Senses Develop 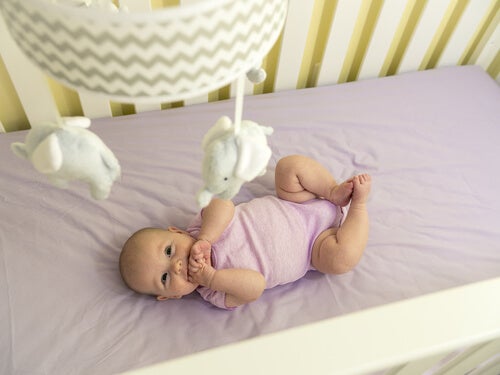 During the third month of a baby’s life, his vision and hearing become more acute and his movements begin to be more intentional, although still not very coordinated.

As for appearance, folds form on his arms and legs, and facial features will begin to be clearly defined. Surely by now you’ll have fallen in love with his smile, which he won’t hesitate to show whenever the opportunity arises.

At this stage, parents will get to see their babies grow incredibly fast. Their average weight is around 6.2 kilograms and average height is approximately 60 centimeters.

Your baby will be very attentive to his surroundings, especially sounds and music. Now is a good time to start stimulation exercises, such as giving toys that make sounds or have lights (as long as they are not dangerous) when they are played with.

Let your child listen to quiet music or splash and play in the water while bathing.

Characteristics of the Baby

As we have said before, in the third month of a baby‘s life, some of his senses will be far more developed, such as vision (which will be fully optimized by the sixth month) and hearing.

Unlike the first and second months, he is now able to point, touch and even grab objects that interest him.

Other changes your child will experience during this phase:

Remember: these are indicative parameters that vary from baby to baby.

In the third month of a baby’s life, vision and hearing are fully developed.

Feeding during the third month of a baby’s life

Many mothers notice that, during the third month, their baby drinks less milk, becomes distracted while breastfeeding or even cries while he eats.

This, combined with a plateau of weight gain for the baby (which is to be expected, according to experts) leads them to think that he is not eating enough.

However, this is normal. First, the baby is very efficient at suckling, so he will ingest the same amount of milk as before, but in less time.

Second, the distractions are understandable because a baby’s brain and senses are developing rapidly. This can cause surprise and lead the first image or sound to be blurred.

Finally, if the mother feels that she is producing less milk, it could be because the mammary glands are ready to produce it according to demand. This is why the cessation of leakage in the other breast will also occur.

However, this should not be interpreted as if the baby has lost interest in food. Babies eat out of necessity, not obligation. When he is hungry, he will eat.

In many countries, maternity leave ends after sixty days or 8 weeks after giving birth. This generates mixed feelings for many mothers.

On the one hand, there is the satisfaction of resuming normal activity and “re-entering” the workforce and social world.

After several months of facing the difficult task of raising a newborn, going back to work (which we always complain about) almost seems like a vacation for new mothers.

Of course, the opposite can also happen. Going away for a while and seeing things in a new perspective can help us to rethink the course of our lives and choose the best option for the future.

On the other hand, there is the anguish of having to leave your baby at home. You have become accustomed to his company, and you’ll wonder if he will notice your absence and, above all, if he will be able to handle it.

What do you do? Should you start looking for a nanny? Do you leave him with his grandmother? The truth is that there is no magic formula to answer this question.

Think it over, talk about it with your loved ones and even try it temporarily to see what feelings come up. The help of a professional does not hurt in these cases. A psychotherapist or a lactation expert can provide very valuable advice.

The important thing is to look around as we retrace that path and know how to interpret our own feelings, as well as those of the baby.

Once this is done, you must decide what is best in order to go through this stage feeling fulfilled and happy.