Separation Anxiety in Babies: What You Should Know

The anxiety that originates in babies when they’re separated from their mother is a normal part of development. However, it's important to know how to deal with it to prevent future anxiety disorders. 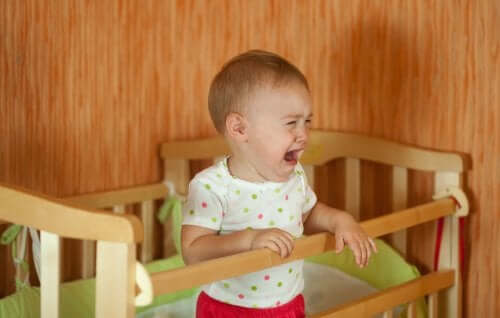 Is separation anxiety in babies normal?

This anxiety intensifies until they’re about two years old and then decreases. However, she warns that if it continues until age three, it’s possible that the child suffers from an emotional disorder.

As we explained above, the anxiety that manifests in babies when they separate from their mother is a normal phenomenon. Some theoretical proposals even propose it’s a good sign.

Mary Ainsworth, in her Strange Situation experiment, analyzed the reaction of babies when their mothers went away and left them alone or with another unknown person. From it, she developed a classification of patterns of attachment: secure, anxious-avoidant, insecure, anxious-ambivalent/resistant, insecure, and disorganized/disoriented.

Strategies to help your baby through separation anxiety

This approach is a step-by-step way to help babies and children overcome anxiety. It consists of helping your child deal with small challenges before tackling them with other challenges that may be more terrifying for them. It’s based on gradual exposure and encourages children to face their fears rather than avoid them:

“Do not avoid your children the difficulties of life, teach them rather to overcome them.”

In summary, separation anxiety in babies is a logical phenomenon and a normal part of development. For a baby, their mother is everything and, from the point of view of survival, anxiety at this stage makes total sense.

However, you need to know how to drive this anxiety so it doesn’t lead to an anxiety disorder. Preparation, brief and routine goodbyes, and the passage of time are the best ways to cope with separation anxiety in babies.

Once your baby observes that you always come back, they’ll realize that you’re not abandoning them. This will help them feel increasingly confident and independent in your absence.

Separation Anxiety: How to Deal with It
What affects can separation anxiety have on parents and children? Learn to recognize them, and find out how to treat them. Read more »
Link copied!
Interesting Articles
A baby's behavior
How to Avoid Stress when You Visit People with Your Baby

From birth, babies begin to perform certain innate movements in order to adapt to the environment, survive, and protect themselves.…

A baby's behavior
7 Curiosities About Body Language in Babies

A baby's behavior
How Many Bowel Movements Should Newborns Make?

One of the most frequent questions parents ask pediatricians is how many bowel movements newborns should make. In addition, they…