Is It Possible to Prevent Sudden Infant Death Syndrome (SIDS)?

Sudden infant death syndrome (SIDS) is an issue that greatly concerns parents. In this article, we’ll discuss the measures you can take to prevent it. 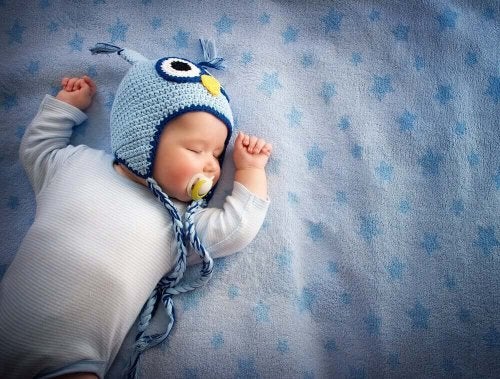 Sudden infant death syndrome (SIDS) is the unexplained death of a baby less than a year old. Little is known about the cause and no specific treatment exists. Normally, it’s unpredictable. That’s why it’s an issue that concerns parents.

In this article, we’ll talk about sudden infant death syndrome and discuss whether it’s possible to take any actions to prevent it.

Sudden infant death syndrome (SIDS) is the unexplained death of a baby less than a year old. It apparently occurs while the baby is asleep.

There’s no medical explanation for it, not even after studying the environment in which it occurred, the newborn’s history, and practicing an autopsy on the baby.

It’s believed that the physiological cause of sudden death is immaturity of the baby’s brain. Specifically, the area that controls breathing and sleep. This immaturity makes the baby unable to wake up reflexively when there’s a lack of oxygen.

In normal times, when the body senses a lack of oxygen, it sends signals for the baby to wake up and cry. When the baby cries, they receive the oxygen they need. In these cases, the brain doesn’t send the sign and the baby doesn’t wake up, decreasing the amount of oxygen in their body.

Although, as we already mentioned, the actual cause of sudden death isn’t known, experts have identified certain situations where this is most likely to occur.

You may be interested in: How Tobacco Smoke Affects the Fetus

Since pediatricians began recommending placing babies to sleep on their backs, the number of sudden deaths has decreased a lot. As we mentioned above, sleeping on their stomach is the main risk factor. Thus, you improve your baby’s breathing and safety by ensuring that they sleep on their back.

Parents can take other steps to reduce the risk of sudden death in your baby. Some of them are:

Sudden infant death syndrome is a complex issue experts don’t know much about. However, the implementation of these recommended measures by the Spanish Pediatric Association has made the number of cases decrease considerably.

It’s important for parents to receive a good education about the birth of the baby or take preparation courses. Also, it’s very important that both the child and the mother go to their medical checkups.

The Field of Pediatrics: What You Should Know
The field of pediatrics is the branch of medicine responsible for studying healthy and sick children. Keep reading to learn all about this part of medicine. Read more »
Link copied!
Interesting Articles
Tips for taking care of your baby
When and How to Introduce Gluten into Your Baby's Diet

Tips for taking care of your baby
Check the Diaper: What Your Baby's Feces Say

Although it might seem crazy to some people, there's a universal theme for parents: baby's feces. It certainly isn't the most common…