What Are the Symptoms of Teething in a Baby?

When a baby starts teething, he or she may have different symptoms. We'll tell you which ones are the most common and how to treat them. 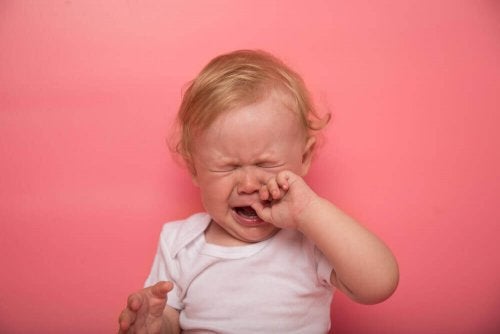 Sometimes, when kids start teething, it’s hard for parents to tell if the symptoms are due to teething or if something else is wrong with the baby. So, in this article, we’ll be telling you what the main symptoms of teething are and how to help your child cope better.

When does teething start?

The appearance of baby teeth is a period known as teething. Although every child is different, this stage usually begins around 6 months of age. It may be a little earlier or later; this is perfectly normal. However, it would be advisable to go to the dentist if, after reaching one year of age, no teeth have appeared.

As we’ve mentioned, dentition is a slow process, and it won’t be until approximately two years of age when all the baby teeth are in place.

The symptoms of teething

As the teeth start to come through, this can cause pain and irritation in the gums. Because of the age at which it occurs, the baby isn’t yet able to express what’s happening to them. Most often they’re irritable, crying, unwilling to eat, and often wake up at night crying.

In addition to these non-specific symptoms, there are some others that give us more clues that teething is taking place. Two of the clearest symptoms that the baby is starting to teethe are:

When this happens, parents can explore the baby’s mouth. They’ll be able to see the red, swollen gums and small hard white spots on them that will confirm the imminent arrival of baby teeth.

On the other hand, symptoms such as fever, vomiting or diarrhea shouldn’t be attributed to teething. In cases where this type of symptom appears, the pediatrician should be consulted.

How can pain due to teething be relieved?

There are several measures that can be applied to try to reduce the baby’s pain, irritation, and discomfort. Some of them are:

Teething is a stage that all children must go through. It can occur earlier or later, depending on the child. The intensity of the symptoms also varies from baby to baby.

It’s important to be aware of other symptoms that aren’t typical of teething. Once you’re sure that it’s teething that your child is going through, then you just need to be calm and try to relieve their discomfort as much as possible.

Teething Pain: Why It Happens and How to Relieve It
Parents often feel helpless when their babies are suffering from teething pain, but in today's article we'll provide some handy, easy-to-use remedies. Read more »
Link copied!
Interesting Articles
Tips for taking care of your baby
When and How to Introduce Gluten into Your Baby's Diet

Tips for taking care of your baby
Is It Possible to Prevent Sudden Infant Death Syndrome (SIDS)?

Sudden infant death syndrome (SIDS) is the unexplained death of a baby less than a year old. Little is known…