Common Causes of Vomiting in Children

In this article, we've prepared a list of the most common causes of vomiting in children. It'll help you detect the reason your child may be physically ill. 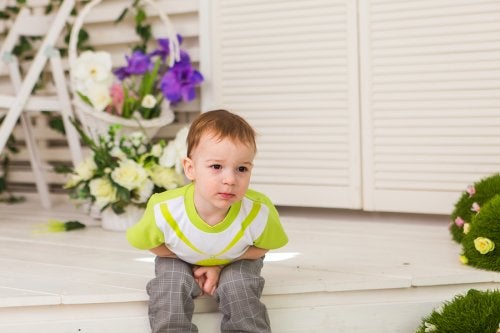 Vomiting in children is a common occurrence that, in most cases, doesn’t last more than a couple of days and isn’t a sign of anything serious. In fact, one of the most common causes of vomiting in children is gastroenteritis, an infection of the intestine usually due to a virus or bacteria. However, there are other triggers.

You need to exercise caution when dealing with this problem, since persistent vomiting can sometimes lead to dehydration. One way to prevent this is with oral rehydration solution, a beverage powder containing sugar and salt to help replace the water and minerals lost through vomiting.

Children who are vomiting should continue to take small sips of fluids, such as water or broth. Fruit juice and soft drinks should be avoided until they’re feeling better. If they aren’t dehydrated and still have an appetite, it may be helpful for them to eat solid foods as usual.

Causes of vomiting in children

Vomiting in children can be due to different causes. The most frequent include:

1. Gastroenteritis, a common cause of vomiting in children

This is the most common cause of vomiting in children, and the most common digestive disorder among infants. It’s a serious cause of dehydration, since it leads to an imbalance of chemicals in the blood through the loss of bodily fluids via vomit and feces.

In addition, this inflammation of the digestive tract can produce vomiting, diarrhea, or both. Occasionally, it’s accompanied by a fever or abdominal cramps, and can last from two days to a week.

Generally, gastroenteritis is caused by a viral, bacterial or parasitic infection. The best way to prevent it is by encouraging children to wash their hands frequently, and to avoid improperly stored food and water.

In most cases, fluids and rehydration solutions are administered to help them recover. However, you need to go to the doctor for a proper diagnosis.

Food allergies can also cause vomiting in children, as well as other symptoms like skin rashes and hives. Therefore, it’s highly important that you consider the foods that may be causing your child to vomit and consulting with a doctor to determine if an allergy is the reason why.

The vomiting may be accompanied by diarrhea. The episodes usually last two days at most. The foods most commonly associated with food allergies in children include eggs, wheat, nuts, milk, fish and seafood.

“Gastroenteritis is the most common cause of vomiting in children. It’s also a serious cause of dehydration, since it leads to an imbalance of chemicals in the blood through the loss of bodily fluids.”

Appendicitis is a painful inflammation of the appendix that causes severe abdominal pain and worsens over time. If you notice that your child is experiencing stomach pain that is gradually intensifying, and you think it may be appendicitis, you should go to the doctor immediately.

Unfortunately, in most cases of appendicitis in children, it will be necessary to remove the appendix as soon as possible.

4. Other infections that can cause vomiting in children

Meanwhile, infections are also a common cause of vomiting in children, and some can be quite serious. In any event, if your child vomits repeatedly and shows other symptoms such as fever, lethargy, or pain, you should visit a doctor immediately.

In general, infections in children cause similar symptoms to those seen in adults and don’t merit special attention. They usually lead to diarrhea, fever, and abdominal cramps. However, they can also be treated with time, rest, rehydration and soft foods.

Finally, keep in mind that vomiting is quite common among children and you shouldn’t worry too much. However, it’s ideal to take into account the causes that may be producing this reaction so you know how to react and when you need to go to the doctor.

Also, don’t forget that while vomiting may be unpleasant, it’s usually not harmful. Nevertheless, episodes of continuous vomiting can lead to dehydration, so it’s important to make sure your child gets enough fluids.

Vomiting and Phlegm: Causes, Prevention and Treatment
What are the symptoms and causes of vomiting and phlegm? It really depends on each case. If you're worried, it's best to consult your doctor. Read more »
Link copied!
Interesting Articles
Tips for raising your child
5 Ways to Connect with Your Baby