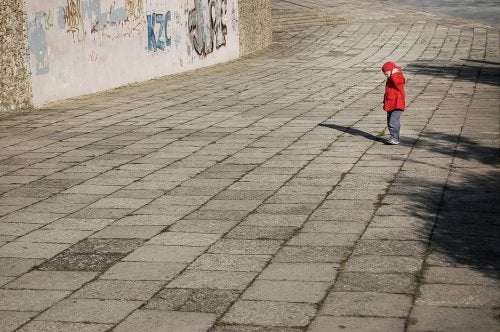 Fathers are a very important piece in the family nucleus and in their children’s development. Unfortunately, many children experience paternal abandonment and this brings serious consequences.

Many mothers admirably exercise both roles at the same time in many situations, They make a great effort to fill in the hole and keep their children from feeling the void. However, some situations are unavoidable.

It’s important to pay attention to our children’s actions in order to give them the support they need.

The consequences of paternal abandonment

1. Low self-esteem. A father’s absence can create fear, frustration and a lack of self-confidence. When children reach school-age and live a somewhat different reality, these elements are usually absent for that reason.

During this time, they will look to fill their father’s absence with a substitute. They may turn to a grandfather, an uncle, or some other important man in their life, searching for a model with whom they can identify.

2. Poor school performance. Some studies show that children can get lower grades due to the lack of a father figure in their lives.

The study affirms that children can suffer depression, discouragement, lack of interest, anxiety, stress and poor concentration in school.

3. Bad conduct. Children with absent fathers tend to be more rebellious with society and are often less tolerant. The “no one understands me” stage tends to be stronger with them. This process is much more evident during adolescence due to the hormonal changes they experience.

4. Identity issues. The lack of a paternal presence can cause children to suffer personality problems and difficulties in the development of certain abilities and behaviors, such as the cohabitation of men and women.

Kids don’t remember what you try to teach them. They remember who you are.

Why fathers abandon their children

Together they compiled information from neighborhoods in Philadelphia and New Jersey, where many fathers claimed they had “done the best they could.”

When they heard the news that they were going to be fathers, three-fourths of the men participating in Edin and Nelson’s investigation were happy. They saw it as a reason to change and mature. But they never moved past that point – usually because they weren’t ready for what was coming.

Among other aspects that influence paternal abandonment, we have alcohol and drug abuse, problems with the law, unemployment and the father’s involvement with other women, even while single.

The investigators concluded that these so-called “unobliged” fathers had good intentions, but changed their minds when faced with the responsibility and the lack of an external orientation.

Children begin by loving their parents; after a time they judge them; rarely, if ever, do they forgive them.

What to do in the case of paternal abandonment

2. Don’t neglect them. They need you more than ever. Go to the park together. Take walks. Make food together. It’s important that your children keep their minds occupied and that you spend time together. Try to encourage them and show them that you are proud of them.

3. Your relatives can also be of great support. Turn to grandparents, aunts and uncles and siblings. They will be a great support to your children whenever they need it.

In difficult situations such as fathers in the family, it’s important that you make your best effort to give your children as much affection as possible. Your mental strength is of utmost importance. With it, you’ll be able to fulfil both roles, and the void will go unnoticed.

Don’t focus on the abandonment. Simply move forward, overcoming any obstacle that comes your way.