Allowing Children to Do Things for Themselves

Many parents question if it's a good idea to let children do things on their own. If so, then which activities are appropriate and at what age? 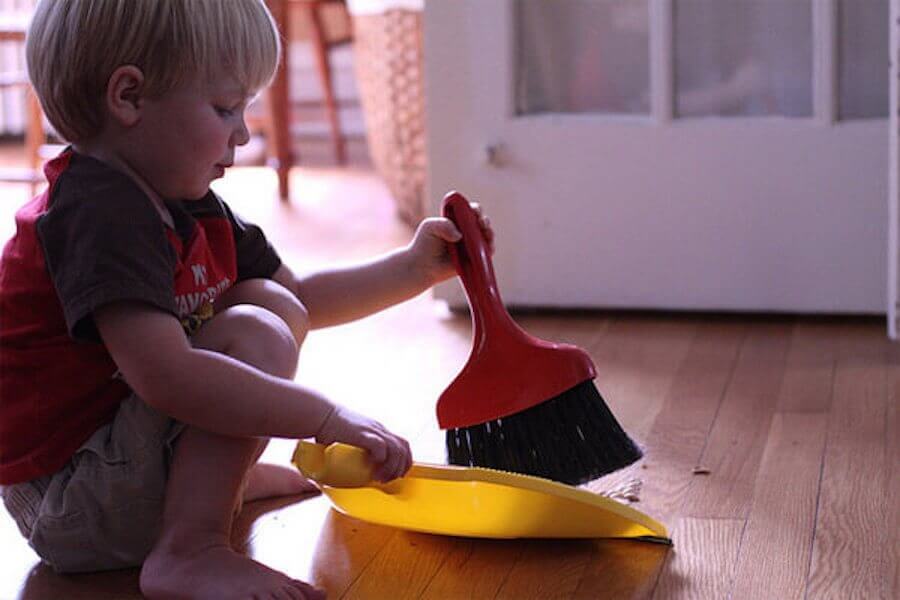 Although allowing children to do things themselves seems like a simple matter, in practice, it’s more complicated.

Essentially, this makes more work for the parents because it means they have to dedicate more time to teaching and supervising the youngsters while they learn to complete certain tasks.

Nonetheless, with the suggestions outlined here, you can teach your children about independence, which will help them become more mature in the future.

Allowing children to do things for themselves according to age

Some suggestions inspired in the Montessori chore chart can guide you in assigning tasks and activities that are suitable for your child’s age.

However, be aware that all children have their own pace of learning, which you should respect.

That is to say, some children are capable of performing tasks above their age range on the chore chart. Other children seem comfortable only with tasks for a younger age.

The way children learn is influenced by their motivation levels, abilities, willingness to do things, knowledge, parents’ education level, and even the environment in which they live and carry out their daily routines.

Small children between 2 and 3 years old

Maybe the parents think their child is still a baby at this age. But young children have the capacity to carry out some simple tasks. For example, they can organize their toys, pick up their clothes, water plants, feed themselves, and put away their storybooks, among other things.

Children from 4 to 5 years old

During this stage, children observe adult behavior, they imitate it and act according to the affirmations or punishments they receive. They’re also capable of being neat and collaborating with picking up and storing their toys.

In addition, children at this stage can set the table, with cutlery, plates, and napkins. They can learn to wait their turn and share food and toys. They can be taught to undress themselves with the help of an adult and they can express their interest in playing with other children.

Children between 6 and 7 years old

At this age, children can be responsible for carrying out simple domestic chores, like dusting and setting the table. You can also ask them to vacuum, tidy their desk, pick out the clothes they’ll wear, and arrange their backpack for school.

It’s worth noting that at around 7 years old, children have the control to avoid being involuntarily careless and they can get around on their own to places nearby. They can walk themselves to a neighbor’s house or relative that lives close by.

In addition, they have the capacity to manage a small allowance each week. They can also identify the advantages in meeting the expectations of parents and teachers and they’re aware that it’s bad to ignore the rules.

At 8 years old, children start to develop personal autonomy. This is why you should start to let them do things on their own as they approach this phase of their lives.

Although they still need some supervision, it’s better if they’re unaware. You can give them some daily responsibilities like making breakfast, sweeping, scrubbing the sink, taking care of pets, and bathing themselves.

“All children have their own pace of learning that should be respected. That is to say, some can carry out certain tasks that may be considered suitable for older children, in theory. Some children may also carry out tasks that are considered for children younger than them.”

At this stage, children develop a higher level of autonomy, so they tend to be more responsible and organized.

They have their own personal criteria, they make decisions, and they emphatically oppose the adults that are closest to them. On the other hand, they wholeheartedly accept rewards for the chores they carry out.

Criticism from children is more frequent at this age, especially towards parents and teachers; now they don’t want to be treated like children. What is more, friends and older siblings influence their behavior and they demand autonomy in all their decisions.

Allowing children to do things themselves. How can this be achieved?

Little by little, allow your children to take on responsibilities that are appropriate for their age. Explain to them how to do things. Act as a role model so you make a positive contribution to their process.

Trust in them and their possibilities. In addition, encourage them and reward their achievements, even if they’re small; show them their mistakes but in a positive way. Teach them how to see failures as opportunities to learn.

Not allowing children to do things for themselves. Does it affect the child?

Not allowing children to do things for themselves does have a negative effect on their maturity levels. You’re adding obstacles in their process of learning to be responsible and developing their autonomy.

This prevents them from having their own initiative, of making decisions and facing difficulties in a positive way. What is more, they’re more likely to have low self-esteem.

In conclusion, it’s best to allow children to do some things themselves, always while under the supervision of the parents or a responsible adult. The tasks should always be according to what is appropriate for their age.

Praising Children in a Healthy and Balanced Way
Praising children, in the right amount, can be very beneficial. It’s up to us to make sure we praise them in a healthy and balanced way Read more »
Link copied!
Interesting Articles
Tips for raising your child
The Advantages of Having Positive Discussion with Your Child