Dream Catchers: Their Origin and Meaning 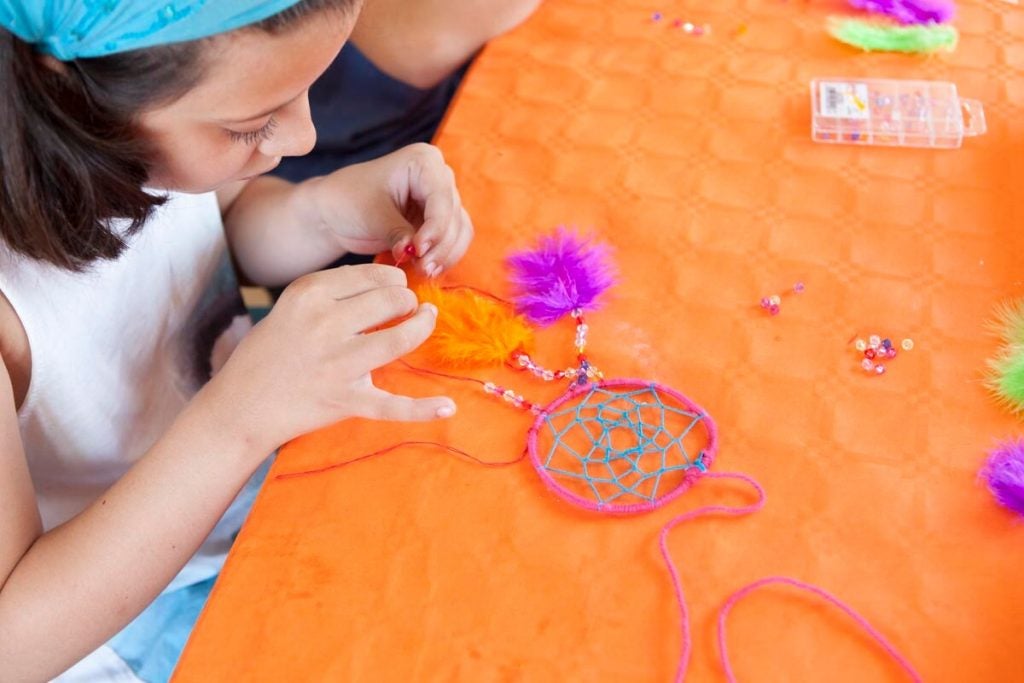 You probably know a bit about a certain object created especially for the protection of children at night. We’re talking about dream catchers, of course.

These mystical objects of ancestral origin were specially designed to protect children’s dreams.

Dream catchers were designed as a spell against evil spirits. Mirko Badiale once said: “We should hang a poster on every child with the words: Be careful, dreams inside.”

That’s why today we’re going to talk about the importance of taking care of your child’s rest, using this particular sacred object.

Dream catchers have started to become very popular. These sacred objects are made in a traditional way, based on colored threads, feathers, beads, willow or cedar branches and a ring. The idea was always to place them on cribs.

Celebrities who like the bohemian style have added to the popularity of putting dream catchers in homes.

Hilary Duff, the popular singer, actress, fashion designer, model and mother of a little boy named Luca, joined the trend. She placed a beautiful giant dream catcher in her son’s bedroom before he was born. Whether it was decoration or belief, it was a very nice gesture.

The origin of dream catchers

For Native Americans, dream catchers have more than one meaning. The Ojibwa people believe they symbolize the movement of the sun. For the Lakota, they are circles of protection that represent the cycles of life.

There are other peoples like the Sioux who understand their “magic” in a different way. They believe that bad things and bad dreams get trapped in the central network of the dream catcher.

The good dreams, according to them, glide down the feathers and the inner beads and travel into the minds of children.

During the 60s and 70s they became popular as souvenirs. They even became an element of cultural identification for different Northern American indigenous peoples.

When the world was young, the legend goes, humans still had contact with the gods. One of the tribes that used to maintain regular communication with the spiritual world was the Lakota tribe.

One morning, the spiritual leader of the tribe had a vision of Iktomi, the teacher of wisdom. Appearing to him in the form of a spider, he spoke in a sacred language that only the Lakota could understand.

While Iktomi spoke, he was collecting feathers, hair, colored beads and other offerings. He told him about the cycles of life and the importance of childhood.

Iktomi explained that our childhood determines how our adult life develops. He said that strong bonds, good knowledge and solid roots have to be woven into their lives during this period.

Look at my creation, and place it on the cradle of your children from now on, added the spider-shaped teacher.

Life goes in cycles, some of them are bad, and others are good. If we are stuck in a negative circle we’ll experience great pain. We must, therefore, close these circles properly and, with wisdom, start more positive, brighter and beautiful ones.

Listen, old man, he said, while making the sacred object. This network forms a perfect circle, but there is a hole in it. Everything will pass through here, however only noble things will remain. When dawn arrives, the evil things will burn with the first ray of light. It will disappear forever.

Iktomi then gave the dream catcher to the old leader and told him to make more, and that each child should sleep with one over his head. He also asked him to spread this advice among his people and other tribes.

Many women believe they symbolize “thresholds” of passage. Passages from the conscious world to the surreal, the boundaries between our home and the outside world. Others consider them to be symbols of protection.

There are even those who believe that dream catchers are a way of motivating us to dream big. To pursue our dreams and make them come true in our lives. This particular approach is extremely inspiring.

To honor the tradition you may like to place them at the side of your children’s crib or bed. But not, however, directly over his head. It’s always best to place them on the wall at a safe distance. We should ensure that they’re put up in such a way that they can’t fall.

To finish with, we’ve got another idea for you. Why not make your own dream catcher with your children? It’s become very popular to do this in children’s parties and other types of gatherings.

It would be really nice for children to have one of these objects made by us, or even by themselves if they’re old enough. The experience would be as fascinating as it is special.