Eating Less, Should I Be Worried? 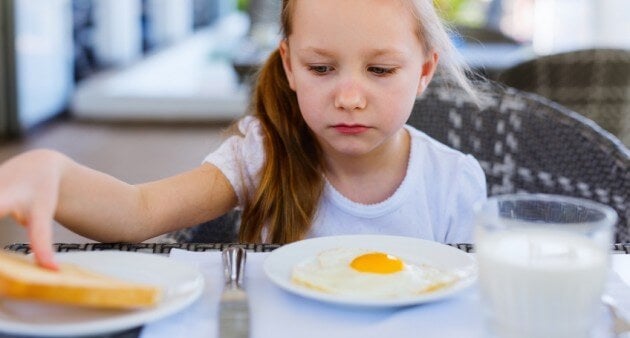 If your child has suddenly started eating less, it’s normal to be concerned. In this article we’ll explain common reasons why this may be happening, and what to do.

After the age of 2, your child starts to grow a little slower, and their feeding starts to slow down as well. Your child will have started walking and this may make them more interested in discovering the world than in eating.

When children are between the age of 2 and 5, they’re still going through the phase of developing their eating habits, preferences and tastes.

As with all stages, this is transitional. While we should pay attention to our children’s development, we shouldn’t be alarmed by every change that occurs.

It’s important that parents ensure that their child eats enough to maintain a stable and healthy weight.

There will be times when children will be very hungry (during which they’ll eat large quantities) and other times when they’ll barely have an appetite.

Pediatricians advise parents to respect this phase instead of making their child eat food they don’t want to. This will also help prevent obesity in the future.

We are what we eat, but what we eat can help us to be much more than we are

Many parents worry when their children are going through phases in which they eat very little quantities.

They feel bad when their children don’t want to eat or when they get picky and say things like: “I don’t want that” or “I don’t like this.”

It’s best to be patient and firm; it’s easy to fall into a child’s whims and tantrums when they don’t want to eat.

Patience, firmness and perseverance will be your allies when it comes to teaching them good habits such as maintaining a healthy and balanced diet.

Is eating less normal during this stage?

Eating should be pleasant. It shouldn’t be a time that causes stress for your children. In order to achieve this, you can try the following strategies:

After the age of 2, children should try new foods. Naturally they’ll like some more than others.

Try to respect their tastes within reasonable parameters. Make sure their diet has foods from every food group.

At this age it’s best to let them eat on their own. It doesn’t matter if they get a little messy. Little by little they’ll learn the rules of the table.

Avoid having the child arrive at the dinner table when they’re exhausted. Sleep is an important factor that often interferes with their appetite.

Will they eat more? Yes, little by little

Many children start to eat more when they turn 5 or 6 because they’ve grown a bit more and so has their stomachs.

Specialists have explained that the amount of food a person needs tends to vary. Some children eat more than others, at the same age and size.

Parents should manage their own expectations. It isn’t ideal to pressure the child if they don’t when to eat. They’ll eat when they’re hungry.

If the child doesn’t want to eat, don’t force them. You don’t have to tell them that it’s bad or punish them just because they don’t want to eat.

Parents shouldn’t insist on forcing a child to eat a particular food. It’s better to encourage them to try or, simply put it on the table so they can try it themselves.

There are also some children who eat very slowly. They shouldn’t have to hurry. Parents should decide how much time to give the child to eat and explain that to the child.

When the time is up, calmly take away their plate and tell them that they are free to go and play.