6 Keys for Good Communication with Teenagers 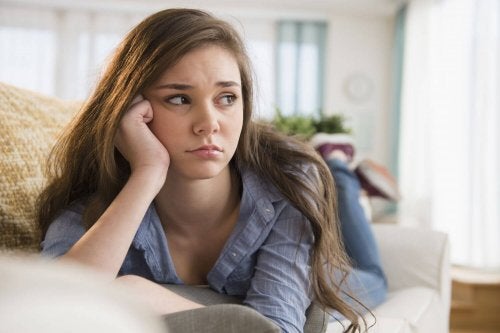 Adolescence is a complicated stage in children’s lives. It’s a time of numerous changes that affect their outward appearance and emotions. Having good communication with teenagers can become really difficult. To get a better idea of how to talk to them, today we’re bringing you some useful suggestions.

Adults can really struggle to have good communication with teenagers. Between the ages of 12 and 20, children’s interests center on themselves and their independence. Parents, meanwhile, often represent a source of conflict, a repression of their freedom and constant arguments.

However, we all know that the ultimate goal for parents is their children’s happiness. To achieve this, there needs to be healthy dialogue. It can, of course, be extremely challenging and quite tricky to try to maintain a relaxed and trusting relationship with your teenager.

6 keys to good communication with teenagers

Although there may be difficulties when talking with a teenager, parents should be patient and never give up. After all, it’s their best tool for establishing and building a bond with their children.

Here are some recommendations that may be useful for you:

Having a chat shouldn’t take place just whenever the parents want it. On the contrary, it should take place when adolescents need it. Don’t force them to sit down and talk and tell you about their problems.

The best thing you can do is show them you’re open, understanding and available. Empathy will also be a great help. Without pressuring, just say that you also went through similar situations and that your experience may be useful.

Interestingly, the second key to talking to teenagers has to do with listening instead of talking. Many chats with parents and children end in monologues, speeches and anecdotes that are irrelevant. This way you’ll only succeed in driving them away.

Your mission is just the opposite. You should attend to their concerns and, when asked, comment on their opinion. You should act in a practical way, just like a friend would do, but, at the same time, never leaving your role as a parent. If you must set limits and boundaries in certain matters, don’t hesitate to do so.

3. Build a relationship of trust

In addition to respecting confidentiality, your child also wants to see you as someone he can trust. For example, if he shares a serious problem with you that he’s having, it’s best first of all to comfort him, and then try to fix it.

Once all this is done, you can then warn him or point out what he might have done wrong. Just consider what the result would be if you did things the other way around? He would most likely never tell you his problems again.

A very effective communicative tactic is to ask “innocent” questions. For example, you can say something like: “So what you’re really trying to say is…?” or “So, all of this has really made you feel….”

Be careful to do this in a non-doubting way. Don’t show any sort of distrust, and just be honest.

This, in addition to giving him attention and showing interest in him, is a way of relieving tensions. It will also give you time to try and think of another course of action. This will possibly put him more at ease, and he may even share more with you.

“At this age, adolescents’ interests are focused on themselves and their independence; parents, meanwhile, often represent a source of conflict, a repression of their freedom and arguments”

5. You must bring calmness to the conversation

Nothing good can come out of a chat where shouting and raised voices are the order of the day. Always try to bring a sense of calm and reasoning to the conversation. The teenager will be quite ready to react aggressively to any signs of argument or strong opposition.

We already mentioned the importance of listening. So now, how should we respond? The first thing we must take into account is that, however much we want to gain our teenager’s trust, we also have to be a role model, guide and teacher.

Therefore, we’ll have to consider giving ground on some matters but standing firm on others. If these are minor matters then try not to give too much time or priority to them. If you turn everything into a conflict, then that won’t benefit your relationship in the slightest.

Try to look for the positive side in every situation. Encourage and trust your teenager, and tell him that, with effort and perseverance, things will always turn out well.

Remember that at this age, one tends to be dramatic and negative. So, don’t be alarmed if your child seems a little “closed.” He’s just learning how to build his own identity.

Always keep in mind that you have a different mentality than they do. Put yourself in their shoes and think about how difficult it is for teenagers to open up and confide in their parents. Don’t miss out on the chance to help them!