The Different Stages of Maturity Development in Children

Maturity development comes in a series of stages. Read this article to learn more about them to accompany your child through the process. 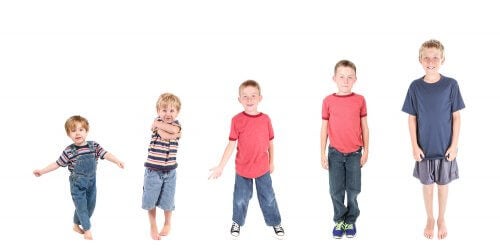 The stages of maturity development and emotional progress in children have their own set of characteristics. They gradually allow children to achieve stability through growth.

The path that leads a child from complete dependence to independence (both physical and psychological) is a long one, and requires parental support. It’s important to know about the stages of maturity development in order to detect any abnormalities.

What are the stages of maturity development?

When assessing a child’s development, one cannot generalize and talk about the “normal” and the pathological exclusively. Health isn’t defined solely as the absence of disease, but as a state of well-being, both physical and psychological. This state is influenced by the child’s specific social and family environment.

This is why we must always consider the individual as a whole before making any diagnosis. Children’s development is a complex process that includes several parts:

These processes relate to and influence one another, but they aren’t linear. A child will experience advances and setbacks, and they don’t maintain the same pace in terms of progress.

To differentiate between the normal and the pathological, it’s necessary to consider several factors:

The stages of maturity development

Newborns are completely dependent on their mothers, both physically and psychologically. They are totally helpless in the face of all the world’s stimuli, and it’s the mother who must, through the mother-child-bond, organize these sensations.

A baby’s reaction to any stimulus is somatic (crying, kicking) and this will allow the mother to respond to their needs while strengthening the relationship. At this stage of maturity development, the baby doesn’t distinguish between himself and the mother.

The mother-child symbiosis eventually disappears, giving way to object relationships, since the mother is the baby’s first essential object of love. During this time, the mother’s absence will cause anguish in the child.

The baby can ask for and name things, and also move around his environment independently without the help of an adult.

The mother’s responses to these advances is crucial, as they can encourage the baby to keep pursuing his curiosity or inhibit him through fear of possible risks and dangers.

During this stage, a diurnal-nocturnal sleep schedule is established, as is the intake of solid foods.

Development between two and three years of age

This period is characterized by significant psychic activity, which is reflected in a change in the child’s attitude and behavior. Sphincter control begins, achieved when the child is neurologically mature.

Symbolic play also begins with the ability to imagine possibilities. At this stage, children want to do more on their own. Every time they achieve something, it reinforces their sense of autonomy.

This period also marks when children begin to acquire a sense of rules. These rules are represented by the parents forbidding certain acts in the face of the child’s increased motor skills. This is when the first notions of right and wrong appear.

Faced with the first frustrations of not getting everything they want, children begin to have tantrums and show stubbornness. This is the famous “no” phase.

Development between four and five years

This stage is characterized by the passage from the dual to the triangular relationship. Children’s psychic apparatuses are already more structured, allowing them to recognize the relationship between their parents.

Also, they no longer consider themselves the center of the universe. From this point on, the relationship progresses from child-mother and child-father to child-mother-father.

This fact is essential to their development, since the children will no longer consider themselves necessary for their parent’s well-being. This will allow them to begin their socialization.

During this stage, the internalization of sexual differentiation also takes place. The anatomical sexual differences become incorporated into the psyche.

It’s important that children don’t focus on the stereotypical behaviors that appear at this stage, a response to the idea of gender roles.

This stage also features the first questions about sexuality (“where babies come from,” for example), as well as the first masturbatory behaviors.

These acts are normal. You simply need to explain to your children when and where they can take place. You should also respond to their questions truthfully.

This stage is characterized by socialization and school life. Parents must tolerate and encourage their child’s social relationships, allowing them to do things with their peers.

Friends become essential, allowing a child’s identity and personality to consolidate. Children become sensitive and jealous of their privacy, and their confidants will be their friends, not their parents. This change shouldn’t be interpreted as a lack of trust, but as a sign of their growing independence.

This is also a period of concrete operations. They begin to manage spatial, temporal and numerical concepts, which allows their education to progress. This is one of the most important milestones of this particular stage.

During this stage, many physical and psychological changes take place. The body changes and grows, and the primary and secondary sex characteristics develop, and the end of childhood occurs. This can lead to a period of mourning.

Adolescents may experience an identity crisis, as they feel a sense of dissatisfaction. They may take refuge in their group of friends and also rebel against the values of the adult world.

This is also when the first romantic and sexual relationships occur, entailing all the consequences of adult sexuality.

Children are constantly evolving individuals, and it’s essential that parents have all the information they need to provide support during each stage in the developmental process.

The Most Common Fears in Children
It's normal for children to be afraid of certain things. Fear of the dark, nightmares or going to the doctor are some of the most common fears in children. Read more »
Link copied!
Interesting Articles
What should you know?
The Differences Between Convergent and Divergent Thinking