How to Earn Your Teenager's Trust 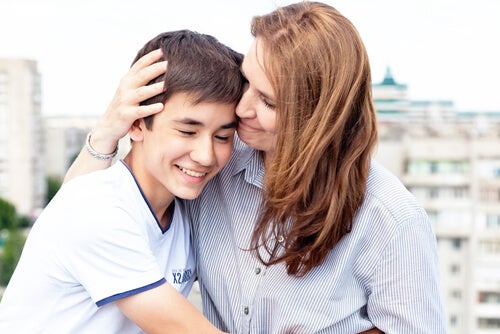 Adolescence can be a difficult time in a child’s life and parents will undoubtedly be tested during this period. However, there are some guidelines than can help parents regain their teenager’s trust.

Most parents ask themselves: “how can I earn my teenager’s trust?” Many parents falsely believe that estrangement is part of the rebellion phase; however, not all cases are the same.

The relationship between parent and child doesn’t always have to deteriorate. The relationship actually depends on many aspects such as character compatibility and the teenager’s internal processes.

The parent-child relationship is forged from childhood and all past experiences have the power to influence it.

It is true that whatever happened in the past cannot be changed. However, is it possible to get closer to our children during their teenage years?

There are many experts who believe that it is possible. There are many aspects to consider. An important aspect is the attitude that parents take when confronted with this stage.

The moment of truth arrives

During childhood, children are often a reflection of their parents. What we sometimes don’t understand is that the relationship changes as the child grows.

Once they feel “grown up” and independent, the child begins to evaluate things from their own point of view.

Parents aren’t left out of this change in a teenager’s life. Adolescence is a complex stage where parents and their authority will be put to the test.

It’s true that rebellion plays a dominant role, they test us as parents to see if we’ll give them everything they ask for.

Gaining the trust of my teenager: control or trust?

This is one of the aspects that can either separate parents and teenagers or bring them closer together. During their emotional emancipation, young people value trust and don’t want to be treated as children.

There are many occasions where parents will have to choose between trusting or controlling.

Certain situations may arise which will force parents to be controlling, punish or limit their teenager’s activities.

However, keep in mind there are always alternative approaches to address the situation. And of course, there are other situations where parents should trust their teenager.

Our level of permissibility as parents will be debated between control and trust.

That’s why as parents we have to be careful to not behave irrationally or subjectively. Offering positive advice and reinforcement rather than sending orders is the key to success.

“Once they feel ‘grown up’ and independent, the child begins to evaluate things from their own point of view.”

A teenager is close to being an adult, and it’s logical that sometimes they don’t understand why they’re given so many orders. What parents should do is progressively give them freedom while establishing certain limits.

That’s why it’s convenient to leave orders behind and start stipulating margins. Margins such as time limits and places they can go to.

Of course if there’s an imminent risk to their safety, as parents we should deny permission. But it’s always important to explain why they’re being denied permission.

When we allow our teenagers to do things, we’re actually doing something very important.

Giving them permission shows them that we trust and respect their own opinion and personality. Sooner or later the teenager will have to start to fend for themselves.

If you’ve ever asked yourself the question, “How can I earn my teenager’s trust?”, another good answer is communication. Communication however, doesn’t always have to come from an authoritative standpoint.

It’s vital for parents to find effective communicative bridges, common themes, adequate tones and use of language. Parents may have to reinvent themselves in their teenager’s eyes.

It won’t be an easy task. Teenagers won’t always want to open up about their emotional lives.

Even those who idolize their parents may find this difficult. It’s important for parents to respect their child’s privacy.

How can I earn my teenager’s trust?

As you can see, the main thing you have to understand is that your child has grown up and they’ll soon be adults. Parents must also understand that trust is a relationship that is built from childhood.

Everything indicates that manipulation and the projection of parents’ fears on their teenagers will have negative effects in the future. A child who was always free and understood won’t feel a need to break free.