Advantages and Disadvantages of Children Napping 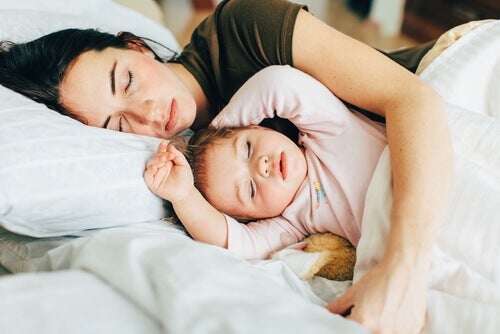 For parents, it’s advisable to know the pros and cons of children napping. Taking naps is practically a tradition in many families and communities.

However, little ones often don’t want to take naps, since they see it as an interruption of what could be a playful moment.

In general, this is a subject that varies greatly according to each family’s customs. In cases where parents tend to rest after lunch, it’s highly likely that children imitate this behavior and make it a habit.

In other cases, especially in families that don’t take naps, infants may totally reject the idea of sleeping in broad daylight.

Which position is the most recommended? Next, we’ll explain some of the advantages and disadvantages of children napping.

Although it’s the basic foundation that everyone can think of, it’s still a great truth. Children are restless, naughty and energetic by nature. Of course, at some point they need to replace this fuel, which runs out as the day goes by.

Not only do children exhaust their resources by running and playing, but also by thinking.

Childhood is a stage of cognitive learning, and this also demands the consumption of energy. As a consequence, the corresponding rest is needed. Naps help satisfy this need.

2. It raises their spirits

Among the several benefits of children napping, we find many related to their state of mind. This short break helps little ones release tension and reduce anxiety.

In addition, as they are less exhausted at night, they will sleep without suffering the nervous episodes of excess fatigue. Therefore, they will rest better at night.

3. Strengthens their memory and learning

While we sleep, a series of very complex neurological processes occur in the brain that, in the final analysis, are responsible for “processing” information previously obtained.

In children, these procedures are much more necessary and important, since they are in a stage in which their mind is “molded,” according to several factors, such as the environment and genetic predisposition.

Almost as an inevitable consequence of all of the above is the fact that children napping has extremely positive effects on their school work, sports and other activities.

It’s simple: besides having a more lucid mind, they’ll have more energy and positivity to face each situation. This equation hardly throws a bad result.

1. Very counterproductive if they sleep too much

Everything is bad in excess, and naps are no exception. According to what has been published in recent years, naps greater than 30 minutes – a number that could be extended slightly in children – have a negative impact on nighttime rest.

In this way, sleep disorders such as insomnia, narcolepsy and others may appear. It is advisable, therefore, to control and regulate the duration of daytime naps.

The so-called hypnic headache mainly affects older people, but there may also be children genetically predisposed to suffer from it. Its intensity is usually moderate, but it’s enough to dispel all the usual advantages of this type of rest.

Children not only exhaust their resources by running and playing, but also through cognitive learning.

3. It could favor the spread of certain respiratory diseases

For example, those who suffer from chronic obstructive pulmonary disease (COPD) are prohibited from napping.

The argument is that muscle relaxation could occur that would counteract normal breathing. The consequences of this would be poor oxygenation of the blood, constant fatigue and respiratory failure.

However, it’s not a risk factor that includes all children. Instead, it points to specific cases, which should be taken into account anyway.

Finally, it’s necessary to point out some recommendations to follow when trying to get children into the habit of napping:

In conclusion, the decision will be made by the parents and the children themselves. The key is to make sure that the right thing is done for the child’s full well-being.