Psychosomatic disorders usually appear when a child reaches the limit of his or her emotional endurance. To prevent them, it's important to consider certain actions and also be attentive to symptoms of anguish and stress. 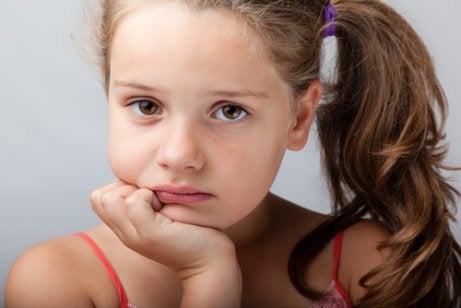 Psychosomatic disorders in children arise because of emotional mismanagement. When children are unable to control their emotions, they may externalize their problems by means of a physical disorder.

This problem doesn’t only exist in children. Adults can also develop these same disorders, and with the same causes. Therefore, individuals can come to suffer psychosomatic disorders throughout their entire lives, from childhood into old age.

Paying attention to the symptoms and seeking professional attention can help minimize both physical and psychological damage.

What are the causes of psychosomatic disorders in children?

In the case of children, an absence or deficiency in emotional management can cause them to develop these disorders. When a problem affects children, they become immersed in a set of emotions that arise due to this problem.

But how can they express what’s happening to them in words? Many children don’t know how to put what they’re feeling into words. Others don’t feel that others listen to them when they do.

If this occurs, the problem remains in the child’s psyche. Sooner or later, the little one’s body manifests the issue through physical symptoms.

These disorders are real, as are their complications. Treatment is not as simple as administering pharmaceuticals. It also involves discovering and treating the underlying psychological issue.

“In the case of children, an absence or deficiency in emotional management can cause them to develop these disorders”

Symptoms of psychosomatic disorders in children

It’s hard to distinguish between disorders whose origin is physical and those that stem from a psychological issue. Paying careful attention is important. If not, we may be basing the solution on an exclusively physical perspective while ignoring a psychological one.

As for a possible psychological origin, there are many situations that can lead to physical disorders. Any event that a child is unable to understand or assimilate that brings him or her to experience the above symptoms.

Parents should be especially attentive during events such as: separation or divorce, the birth of younger siblings, new schools, bullying, etc. If children are very self-demanding, parents should also pay attention to symptoms.

Evaluating how long your child has been experiencing symptoms is fundamental. It’s also important that parents ask themselves if something significant occured that could have affected their child.

What can be done in the face of psychosomatic disorders in children?

There are no miracle solutions to this type of problem, but there are certain recommendations that can be useful:

Lastly, don’t forget that you may need to seek the help of a psychologist. Psychosomatic disorders usually appear when children reach the end of their rope as far as their emotional endurance.

Don’t deny your child the help her or she needs, nor rule out the need for medication prescribed by a pediatrician.