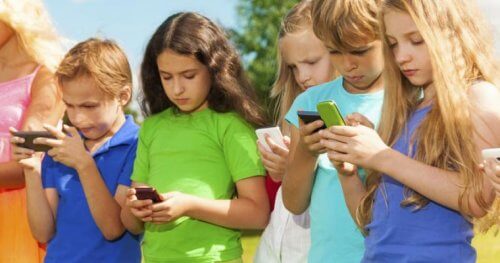 The world is getting more and more connected everyday thanks to technological advances in communication and the internet. Rule 3-6-9-12 sets the age at which your children are ready to use these new devices appropriately.

Experts recommend rule 3-6-9-12 to help parents regulate their children’s use of technology.

Due to the huge influence that computers, tablets and cellphones have on children, it’s important for parents to take the necessary measures to make sure the influence is positive.

Saying that action has to be taken is easy. The real question is: how can you achieve this? What is the appropriate age for them to use technology?

Are rules an effective way to control a child’s use of technology? Let’s find out.

The effects of technology on children

Advancements in technology facilitate and allow for interactivity, integration, communication and learning.

They have overwhelming and inexhaustible varieties that can be used to play, communicate and receive information.

All of these characteristics make technology somewhat of an obligation in order to integrate in today’s society.

Technology however, can also cause problems in children if they’re exposed to:

Children can be exposed to a massive avalanche of negative information.

That’s why it’s so important for parents to make sure their children start using technology at the appropriate age.

This rule serves as a guideline for parents about the appropriate age for children to use technology.

It was proposed in 2008 by a Frenchman named Tisseron Serge. With a degree in child psychology and psychiatry, Serge is also a psychoanalyst and director of research at the Quest Nanterre University in Paris.

The Ambulatory French Pediatric Association endorsed the 3-6-9-12 rule in 2011. The rule strives for limiting the use of technology among children.

Rule 3-6-9-12 establishes a ladder for children to advance progressively in their use of technology. The guidelines are as follows:

Before the age of 3

Children aren’t able to distinguish fiction from reality since they aren’t emotionally mature. Since television doesn’t provide any benefits for children at this age, it’s suggested they start watching after the age of 3.

Television is believed to slow down the development of language and memory. It also increases the risk of childhood obesity.

Parents should encourage their children to play and use their imagination.

Before the age of 6

Video games can be dangerous because they’re addictive. They can end up controlling the child, making them lose track of time.

They sometimes spend many hours playing video games and this can hinder their psycho-motor development.

Games capture their attention more than any other activity, that’s why they’re recommended after the age of 6.

Before the age of 9

Computers have many dangers that can affect a child’s development. Before they reach the age of 9 they aren’t prepared to process a lot of the information circulating on the internet.

When the time comes, you can teach them the rules for using the internet.

Before the age of 12

Although children want to have a smartphone, they aren’t ready for it before the age of 12. They are even less prepared to surf the web or create profiles on social media networks.

After they turn 12 they should be allowed to access the internet with great supervision of their parents and also under time restrictions.

“Technology is nothing. The important thing is to have faith in the people. If they have the tools and they are good and intelligent, they will do wonderful things with them.”
-Steve jobs-

In short, the rule 3-6-9-12 is not enough on its own. Parents have to take the responsibility of controlling how their children spend time in front of screens.

Parents must educate their children on how to respectfully interact with these different means of communication. Only by doing this will we prevent problems in their development.