School Failure and Its Minor Relationship with Intelligence

Failure at school is often related to the presence of limited intelligence. However, this is a very simplistic and misguided thought. 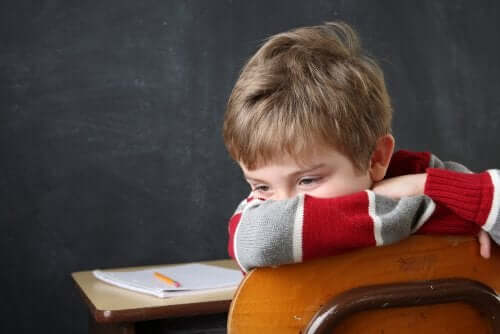 School failure affects a multitude of children and adolescents around the world. In fact, it’s considered one of the great problems of the current education system.

This phenomenon is usually related to students who have a low intellectual level. However, this belief is completely wrong because the causes of school failure are very diverse and not always due to learning difficulties, as we’ll see up next.

The issue with school failure

School failure refers to the difficulties in achieving the academic objectives set by the education system. It can manifest in the following ways:

Unfortunately, it’s common to see any of these behaviors present in schools and institutes.

According to official data corresponding to the rate of school failure in Spain, 19% of young people who are between the ages of 18 and 24 leave school before obtaining a degree in Compulsory Secondary Education. This is very worrisome since education is the responsibility of the whole society and it’s obvious that something is failing and being poorly executed.

What is intelligence and how does it relate to school?

According to psychologist Howard Gardner, intelligence implies the cognitive abilities necessary to solve a problem or to create products that are important in a cultural context. Therefore, it can be said that there are multiple intelligences that help us to be competent in different disciplines.

Each person has a series of limits and potentials in the different areas of knowledge. However, the education system usually evaluates only intellectual abilities regarding linguistic and mathematical logic.

Hence, there are many children who are frustrated by the academic demands of schools since they also have the need to develop other cognitive skills.

Additionally, it’s worth mentioning that students who perform well in school don’t necessarily have a high IQ. Their grades may be due to:

“In the best case, the IQ seems to contribute only 20% of the determinants of success.”

School failure and its minor relationship with intelligence

Once the concept of intelligence is understood, it’s easy to comprehend that school failure has little relation to the intellectual level. Although intelligence influences a student’s academic performance, there are other internal and external factors that determine success or failure in learning.

School failure can be the result of many different factors, such as:

All of this can prevent students from developing their qualities properly, which causes school failure in children.

Undoubtedly, the main conclusion is that school failure can occur in any child, regardless of age and intellectual capacity. Thus, the education system has the responsibility of observing all students closely and helping those who show poor school performance.

This is why we must identify the causes and implement various changes according to the needs of each student. All children have the right to receive a quality education and, thus, be able to succeed in their studies and in life.

Motivating Your Child To Stay In School
Motivating your child to not abandon their studies can be difficult. Especially when their group of friends think that school is a waste of time. Read more »
Link copied!
Interesting Articles
Childhood behavior
Helping Children Manage Disappointment