Separating twins at school is an important decision. In this article, we'll take a look at important factors to consider when deciding what's best for your kids. 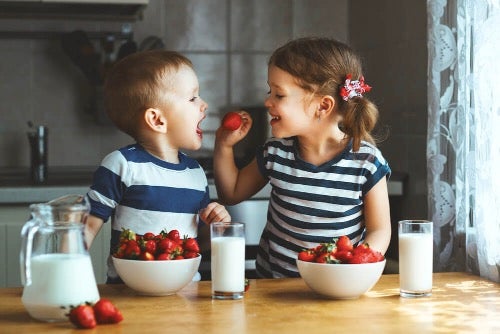 Specialists say that one of the primary concerns of parents of twins is whether separating twins at school is good or bad. There has been plenty of debate regarding the need for twins or other multiple-birth siblings to remain together permanently.

Parents of twins can attest to just how different these siblings can be from one another. Their personalities are one of the main qualities that allows for them to be clearly differentiated.

As such, sometimes schools take the initiative to separate them so that one doesn’t cling unnecessarily to the other.

Often, school management will require twins to be separated. This isn’t always well-received by parents or the children themselves. The explanation tends to be similar: separating them will help each one develop their own identity. However, it’s difficult to find a consensus, as many parents are against this imposition.

Reasons for separating twins at school

For some reason, schools believe multiple-birth siblings (whether they’re identical or not) have the right to develop separately. They believe that although they may be twins, each is an individual with their own personality, and doesn’t depend on the other to learn and grow at their own pace.

The idea is to give them the opportunity to interact with others and have their own opinions. Twins, triplets, and multiple-birth siblings in general tend to be very close, capable of relying on one another for support in almost any activity. Many teachers believe this isn’t actually positive, and can impede their development.

By relying on a sibling’s support, or even imitating him or her, the child can solve problems without making much of an effort. In this sense, some believe that this makes siblings more vulnerable when they have to defend themselves on their own. If they grow accustomed to this support, they’ll experience problems when they have to act alone.

In this respect, the idea behind separating twins at school is to contribute to the development of their individual potentials. Some believe this is also applicable in other kinds of relationships, including cousins, neighbors, and friends.

That is to say that a child who relies upon a particular relationship with another child must be separated in order to help him or her function as an individual. However, science considers these assumptions to lack a factual basis.

Science: separation can be harmful

Beyond the inconveniences it may present parents in terms of scheduling and schoolwork, recent studies say that separating twins at school can do unnecessary damage.

Science says that there are no arguments supporting the notion that separating twins will help them develop their own identities. On the contrary, research shows that being in the same class has no effect on this aspect at all.

According to the experts, other factors contribute to twins developing their own personalities. In this respect, their home lives and the individual character may be enough for their personalities to fully develop.

“Is solace anywhere more comfortable than in the arms of a sister?”

The University of Wisconsin and Kings College have provided a set of data that explains how harmful separating twins at school can be. Conducted in 2004 and using data from more than 800 pairs of twins, their research produced conclusive results.

What the study says

The study used a sample of 878 pairs of same-sex twins between the ages of five and seven, all in school. The sample was categorized into three groups: 61 percent of the children were in the same class (non-separated twins); the next group was separated at school since the age of five; and the final group separated from the age of seven.

The results were as follows:

Other studies and findings reveal that children experience more stress at the beginning of their schooling. Therefore, it’s not advisable to make things worse by separating them from someone so important to them.

None of the observations suggest any improvements due to separation; in fact, the opposite is true. If the siblings are separated between eight and 12, there may be certain benefits (e.g. increased effort), but all children are different.

It’s recommended to pay attention to children’s needs. Some are closer to their siblings than others. Additionally, the age at which they separate, or whether they’re identical or not, can be deciding factors.

In certain cases, separation may be necessary and favorable. In any event, it’s always important to consult with experts.