How to Handle the Silent Treatment in Children

In this article, we'll tell you everything you need to know about the silent treatment. We'll also provide you with five tips to combat it if your children are doing it. 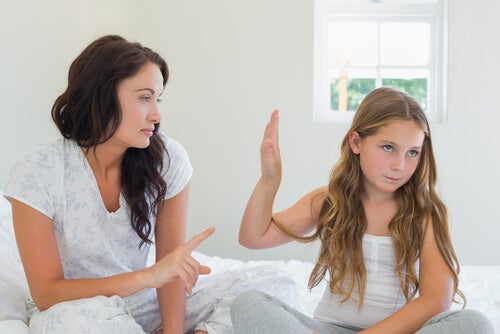 The silent treatment consists of not talking to someone for one reason or another. It’s when someone ignores another person to avoid an unwanted situation. The person is trying to show that they don’t agree with what’s happening.

The term is quite self explanatory, and the main objective of this behavior is to ignore another person. It can occur in all kinds of relationships, whether family, friends, or partner.

As a mother, you should make sure that your children don’t use this tactic to get what they want. You need to learn to adopt an approach that encourages them to open up instead of closing thesmelves off.

5 tips to face the silent treatment

It’s true that parents can also use silence to deal with unwanted situations. However, what happens when your child uses the silent treatment?

Below, we’ll show you some tips to deal with your child’s attitude.

It’s not easy being on the receiving end of the silent treatment. This is especially true when your children feel hurt, upset or frustrated.

Keep in mind that these emotions are a natural response to certain things. However, you should let them know that you won’t accept this behavior. Your children’s attitude change might make you angry or freak out. Then, they’ll know that they’re getting the reaction they want.

In these cases, the best thing is to try and stay calm on the outside. Don’t get angry, even if you feel frustrated.

Our second piece of advice is to not give in when your children try giving you the silent treatment. Children often use this technique to try to achieve a goal. For example, they may want to avoid punishment after breaking a rule.

Your children don’t want to recognize that they’ve done something wrong and accept the consequences. Instead, they reverse the situation using the silent treatment to try to attract attention. Their goal is to change your mind and lift the punishment you gave them.

In many cases, parents want to make their children happy and hate when they’re upset with them. Therefore, they change their decisions to break the silence and give in.

If this happens, children will be happy and talk again. However, they won’t have learned anything from the situation. They’ll learn that they can get away with the silent treatment. Consequently, they won’t assume the responsibilities that come with their actions. In addition, they won’t improve the way they act.

“Education is the ability to listen to almost anything without losing your calm or self-esteem.”

3. Take charge of the problem

You can’t force your children to speak. You need to be available and wait for them to want to talk about the problem. We recommend keeping calm while tackling the problem.

Make it clear that the silent treatment isn’t a way to resolve issues. For example, you can say, “I understand that you’re upset. We can’t solve the problem if you don’t talk to me.”

4. Give your children an incentive to talk

Another way to encourage children to open up faster is to take away privileges until they speak. You can take away their phone or video games until they stop using the silent treatment. On the other hand, you can ask them to stay in their room until they’re ready to talk.

Don’t turn it into a bitter fight or a big problem. You just have to say, “I’m going to keep your phone until you decide to talk to me again.”

Asking them over and over again to talk can make them keep quiet even longer. Therefore, you need to give them space to think about what happened and ways to solve the problem.

One thing you shouldn’t do is turn the situation into a power struggle. Fighting with your children or using the silent treatment on them won’t solve anything. It will only make the situation worse and hurt your children’s feelings.

In short, children often use the silent treatment when they don’t know how to handle difficult situations. As a mother, you must teach your children problem-solving skills. Help them control their feelings without needing to resort to this kind of behavior.