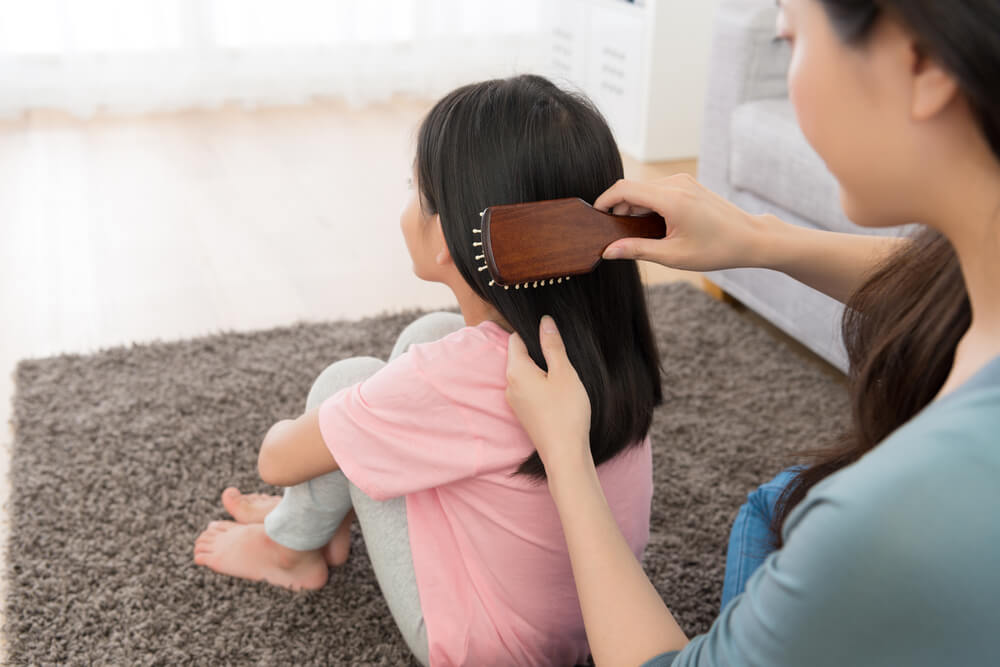 In this article you’ll find five simple hairstyles that your little girl will love!

For girls’ hairstyles, it’s important to find something easy, but also something that doesn’t look messy or unkempt.

There are also other aspects to take into account, like the girl’s hair type, length, and of course, comfort.

Ponytails and braids are a great option. However, don’t simplify them too much – there are some little details you can add here or there to make something fantastic.

This girl’s hairstyle starts with a normal ponytail, 3 or 4 centimeters below the base of the neck. The special detail is that it’s decorated with the hair itself.

How? It’s simple: before making the ponytail, simply separate a section of hair on the right, and another on the left. Next, make a ponytail as usual, securing it with an elastic band.

Then interlace the strands you left out of the ponytail, on top of the band. They should make a kind of “x” around the ponytail. Finally, secure everything with a hairpin under the ponytail.

This is also a very easy style, and it has a nice elegant touch. Start by brushing the hair back, so that it’s pulled tight.

Next, make a ponytail with an elastic band, preferably high up on the head. This will better show off the knot.

Next, take a strand from the back part of the ponytail (the part close to the head) and wind it around the elastic band. Finally, secure it with a hairpin.

This is a comfortable girl’s hairstyle that also takes care of her hair. It’s ideal for use when she needs to move around a lot, for example in gym or dance class. Since it’s well secured, it won’t come out.

The first step is to make a high ponytail and secure it with an elastic band. Next, brush the hair to one side and forward, so that it covers her forehead.

Then start to wind all the hair around the ponytail, finally securing it with three or four pins. It will look like a cup on top of her head.

You can also try a variation of the “cotton candy,” if the girl has very long hair. For this variation, instead of making a high ponytail, try a braid. Then wind it around itself and secure it with pins.

This is a very comfortable style because it controls your hair fairly simply and doesn’t come out easily. The girl can play and move around and the hairstyle will stay intact without a problem. Fishtail braids can be done with all or part of the hair. Normally it’s only a part.

The first step is to brush all the hair back, so that it’s tight. Then, separate the upper part, from the forehead to the crown of the head, and brush it up. Divide this section into three parts and start braiding it.

As you go, take segments of hair from the sides and add them to the braid. This means that the first braid will turn into a larger braid.

Sometimes you can take sections of hair up to the ears, then finish the braid and leave the rest of the hair loose. Or, you can finish the braid, or in other words braid to the neck. To finish, simply secure it with a plastic band.

This hairstyle only works for girls with long hair. If not, it can look very unusual. It’s best for special occasions, as it’s a little complicated for daily use.

First, take the hair and push it forward on one side. Then separate it into two parts, using your fingers. The hairstyle starts at the neck, without touching the head. It’s a low braid.

Wind up one strand and divide the other in two again. There will be three segments: the rolled hair, and the section divided into two parts. With these three sections, make a braid and repeat again, until reaching the end.

The rolled part should alternate in both sections. In other words, first the right segment will be rolled, then in the next cycle it’s the left, and so on. Finally, secure it with an elastic band.

We hope you and your daughter enjoy these pretty yet simple hairstyles.