In this article, we’ll try to debunk the deeply-rooted myth that a bad temper is synonymous with character. Below, discover the differences between bad temper and character to understand why they aren’t the same. 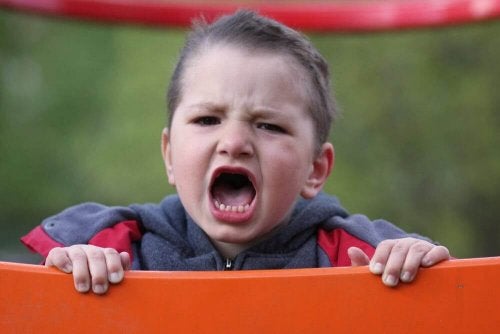 How many times, when a child has a tantrum or responds badly, have you heard their parents or relatives say: “They have a lot of character!” But you must begin to understand that bad temper isn’t synonymous with character. In fact, nobody should be proud of being bad-tempered.

The definitions of character and bad temper

Character refers to the set of traits, qualities, or circumstances that indicate a person’s nature and sets them apart from others. Character shapes a person’s personality. It’s also how they react to situations and relate to others.

In contrast, bad temper is related to attitudes or a predisposition to be or get angry quickly and without any apparent reasons. It’s related to a negative and even aggressive state at times by people who say they have a bad temper or are bad-tempered.

In addition, we can associate it with uncompromising or inflexible people who don’t listen, don’t accept other people’s advice, and who lose their patience quickly.

People who brag about their bad ways and responses believe that everyone should put up with their outbursts and have little tact and no empathy for others.

Moreover, if we were to ask some psychologists to talk about it, perhaps they’d say that a person who doesn’t know how to control themselves not only doesn’t have a lot of character but probably has problems with their character.

On the contrary, a person who has a strong character is able to control themselves so they don’t lose their temper without justified reasons. And even more so, they know how to be and behave with others, talking to and addressing them with good manners, respect, and affection.

Today, people tend to want to attract attention and, sometimes, at any cost or price. Thus, some parents are proud of their children when they display their bad temper because they believe that this denotes a lot of character. And when it comes to their upbringing, they aren’t precisely doing them a favor.

Feeding children’s bad temper can have negative effects on their development and on the formation of their personality. And, on the contrary, it’s very positive to nurture good character in children and young people so that they develop a lot of character.

It’s better to encourage having an upright, critical, and rational character, with a capacity for emotional self-control, and characterized by objectivity, tolerance, and empathy. This type of character will make them stand out from the rest and allow them to perform a lot better in different present and future spheres and achieve their goals.

Being bad-tempered isn’t synonymous with having a lot of character. If a person has a bad temper, maybe they also have a bad character. However, in most cases, being bad-tempered doesn’t even indicate a bad character, but, on the contrary, denotes not having a lot of character at all. Although these statements may anger those who pride themselves on their bad temper…

People with a lot of character don’t lose their temper as easily and have many resources that allow them to endure many different situations and interact with people. Cultivating a lot of character isn’t an easy task, since anyone can shout or respond badly.

Seeing how children evolve over time is wonderful and extraordinary. Little by little, they become little people and, when we…

During childhood, all children will experience one or more emotional development issues. These are a normal part of development. However,…

Most people show a preference or tendency to use one side of the body. This is called laterality. Below, we'll…