Why Do Children Imitate What They See?

Babies begin to imitate everything they see a few minutes after birth. But why do children imitate what they see? In this article, we'll explain the main reasons. 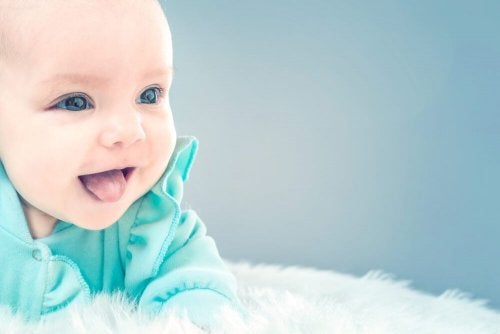 Children have the great ability to imitate what they see. Within hours of birth, babies begin to imitate the adults around them. For example, if their mother sticks out her tongue, the newborn imitates her with remarkable success by copying the same behavior. But why do children imitate everything they see? What’s the reason for this behavior?

Thanks to imitation, children become able to exercise their own possibilities of expression. We could say that babies begin to experience the coincidence of what’s perceived with their behavior, according to the theory of modeled behavior (Meltzoff, 2007; Meltzoff & Moore, 1977).

When babies are 12 to 21 days old, they can mimic facial and manual gestures. Such imitation implies that newborns can equate their own invisible behaviors with gestures they see others do. Next, we’ll show you a study in which you’ll see when children begin to imitate what they see.

“Don’t worry that children never listen to you; worry that they are always watching you.”

In a study conducted by Meltzoff AN. and Moore MK., they evaluated the ability of newborns aged between 0.7 and 71 hours to imitate two adult facial gestures: mouth opening and tongue protrusion (sticking out the tongue). They placed the newborns in a dimly lit room and the experts used infrared-sensitive video equipment to observe them.

Then, the videotaped records were evaluated by an observer who wasn’t informed about the gesture shown to the babies. The experts counted both the frequency and duration of neonatal mouth openings and tongue protrusions. The results showed that newborns can mimic both adult gestures.

This study suggests that this imitative behavior is probably due to three possible underlying mechanisms: instrumental or associative learning, innate releasing mechanisms, and active intermodal matching.

“Imitation is the most sincere form of flattery.”

Why do children imitate what they see?

Children imitate what they see due to mirror neurons, which were discovered by Giacomo Rizzolatti. Mirror neurons are particular types of neurons that humans possess.

These neurons activate when a person performs an action but also when that person observes a similar action performed by another person. Mirror neurons are part of a neural network system that enables execution-intention-emotion perception.

When we stop to observe another person, the simple movement of their hand, foot, or mouth activates the same specific regions of the motor cortex, as if the observer were making the same movements. But the process goes beyond that – the movement, when observed, generates a similar latent movement in the observer.

The system integrates into its neural circuits the attribution or perception of other people’s intentions, as explained by the theory of mind.

In this regard, interpersonal understanding and action is based on our understanding of the intentions and, also, of the motives of other people’s behaviors. To achieve this, neural circuits subliminally simulate the actions we observe, allowing us to identify with others.

Thus, actor and observer are in very similar neural states, as if they were doing the same actions, capturing intentions or feeling the same emotions.

Humans are social beings. Thus, our survival depends on understanding the intentions and emotions that people’s behaviors translate. Mirror neurons make it possible for us to understand the minds of our peers and not through conceptual reasoning but directly – by feeling and without having to think.

Mirror neuron systems make it possible to learn imitation gestures: smiling, walking, talking, dancing, and playing soccer, among other actions. In addition, they allow us to feel that we fell when we see another person on the floor, the pain we feel when someone cries, and shared joy, among others.

“There’s a certain consistency to who I am and what I do, and I think people have finally said, ‘Well, you know, I kinda get her now.’ I’ve actually had people say that to me.”

The Role of Influencers in Our Children’s Lives
Thanks to the social media revolution, a new phenomenon has come into existance. Today we'll talk about the role of influencers in our children's lives. Read more »
Link copied!
Interesting Articles
Childhood behavior
How to Help Sensitive Children that Get Angry Easily

Inevitably, conflicts happen in schools and daycare centers. Students are at an age when they're still learning to relate to…

It’s normal for young children to be very demanding and persistent. However, when raising high demand children, it can feel like they never seem to be satisfied no matter what…

Childhood behavior
Negative Consequences of the Pygmalion Effect on Children

The Pygmalion effect is well-known in the world of social sciences. It’s a theory that states that expectations can influence…

Childhood psychology
Play as a Technique for Evaluation and Diagnosis

There are many issues that can cause a child to require psychological intervention. However, in these circumstances, many parents ask…