3 Keys for Dealing with Impulsive Children

Impulsiveness doesn't have to be a bad thing, in and of itself. However, when taken to the extreme, it can make coexistence very difficult. With that in mind, we'll share 3 keys for dealing with impulsive children. 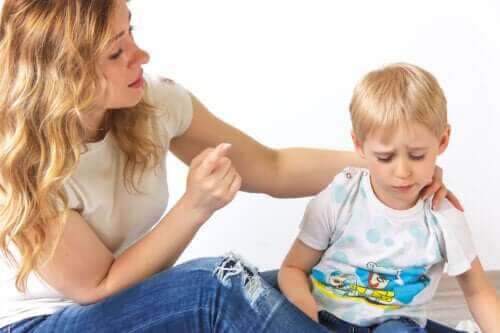 If your child’s rash behavior is causing problems with others, we’re here to help. In the article below, we’ll offer 3 keys to dealing with impulsive children to help them calm down and reflect on their actions and reactions.

Let’s put ourselves in the following situation. Let’s imagine that a child is playing marbles with another friend. Just when he sees that he’s going to lose, he kicks everything to spoil the game, gets angry, cries, shouts, or runs off in a rage. This is just one example of the kinds of behaviors that we can define as impulsive.

According to experts like Bob Cunningham from EdM, impulsivity is characteristic of a child’s temperament and also of an adult’s personality. Moreover, this characteristic will always be present to a greater or lesser degree in human beings, because it’s nothing new.

It’s important to clarify that we don’t always need to see impulsivity, stress, and even anxiety as negative traits. They’re evolutionary factors of the human species that have arisen in our adaptation to the environment. And, if we know how to take advantage of them, they can all be very positive for survival.

However, if a person constantly manifests impulsive behavior, it can end up causing problems when it comes to getting along with others. So, before it alters or affects the life of an entire family, classroom, etc., it’s good for parents, educators, and professionals to look for the best solution.

3 keys for dealing with impulsive children

Dealing with impulsive children isn’t always easy, but it’s necessary. The sooner you act, the sooner you can tackle the problems. And this is in the best interest of the child and also of the whole family.

We must always be firm

We’ve already mentioned that impulsive children have little self-control. In fact, it’s very common for them to regret their actions after the fact. However, we must be clear that they really have a hard time controlling themselves.

As parents, teachers, or educators we must be firm. It’s true that it’s exhausting, but you mustn’t lose heart. Stick to your rules and guidelines, talk to your children as much as necessary, and always be very clear, patient, and consistent.

If you begin to give in, scream, or lose control, first of all, you won’t be able to help your child. But, what’s more, you may end up making things worse. In fact, your child may try to manipulate you if they notice any doubt or hesitation and think they can get some benefit from it.

“When little people are overwhelmed by big emotions, it’s our job to share our calm, not join in their chaos.”

We must always act calmly

Even in situations of extreme impulsiveness, with insults, tantrums, and aggression, as adults, we must force ourselves to stay calm. In fact, these are the moments when it’s most important to show yourself as serene and calm.


However, as you remain calm, you must at the same time show determination and strength. This is how you’ll transmit to your child that they won’t achieve their objectives with this attitude.

Give an explanation to impulsive children

Once the child has calmed down, you should talk to them in a calm and sensible way. At this moment, you’ll reflect on the negative behaviors that the child has displayed, and explain that this sort of behavior won’t lead to anything positive.

In short, actions always have consequences. If a child acts impulsively, they must understand that this isn’t the best way to proceed. If, even with this advice, you’re unable to calm them down and help them think before acting impulsively, you may be dealing with a more serious problem. In that case, don’t delay in seeing a professional in child psychology to avoid future complications.

The Orange Rhino Technique to Stop Yelling
Do you want to stop yelling at your children, but you don't know how? Put the orange rhino technique into practice today! Read more »
Link copied!
Interesting Articles
Childhood behavior
The Key to Success: An Activity to Motivate Children