Antisocial personality disorder causes a lack of emotional and behavioral control in children. Children with this disorder don't respect the rights of others or conform to social norms. 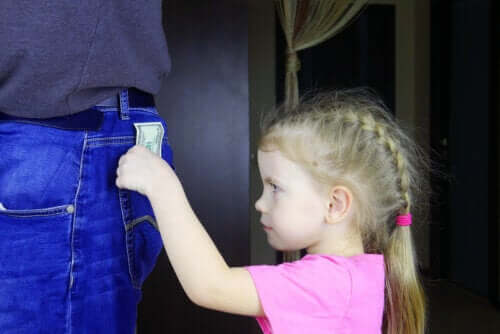 Antisocial conduct disorder is a disorder that usually appears at an early age, around 5 or 6 years old. It’s characterized by a deficiency in emotional and behavioral control that leads the child to not respect the rights of others or to conform to social norms. Early detection is important in order to find a solution as soon as possible.

We all live in society and, therefore, we must respect the rights of others by following certain rules. In general, people respect these rules, as it’s something we’ve already internalized. However, those who suffer from this condition are unable to respect them.

What is antisocial conduct disorder?

Antisocial conduct disorder is common in young children, although it can occur at other times in child development. It involves behaviors that violate the rights of others, don’t respect social norms, and cause confrontations with authority figures.

In order to diagnose a child with antisocial conduct disorder, these behaviors must occur in a persistent and repetitive way for at least 12 months. Those who suffer from it usually have aggressive behaviors against people or animals (sometimes they can even torture small animals). They may also steal, lie, etc.

These children experience significant deterioration in several areas, such as school and social life. They feel little empathy and ignore the feelings of others. What’s more, most of the time, they act impulsively without thinking about the consequences.

To make a diagnosis, 15 symptoms must have been present in the last year and at least 1 in the last 6 months. Thus, the symptoms are organized as follows:

There are 3 types of antisocial conduct disorder, depending on the age at which symptoms begin:

There are several causes that may influence the onset of antisocial conduct disorder. What’s more, at times, they may interact with each other.

Today, there’s still no fully established treatment. Often, treatment involves programs in which parents and children play a crucial role along with professionals from different disciplines.

In very complicated cases, medication with drugs such as selective serotonin reuptake inhibitors (SSRIs) may be recommended.

In short, dissociative behavior disorder must be detected as soon as the first symptoms appear in order to start treatment and thus improve its prognosis.

If there’s even the slightest concern that your child may suffer from this disorder, it’s important that you seek professional help to make a thorough evaluation and begin treatment as soon as possible. Don’t despair, be patient, and stay calm. Things will gradually get better.