Emotional issues are a normal part of children's development. Therefore, all children will experience some issues during their childhood. 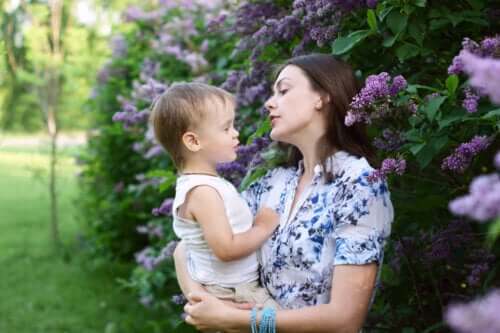 During childhood, all children will experience one or more emotional development issues. These are a normal part of development. However, if these issues are very frequent or worsen over time, they could lead to certain pathologies.

Sometimes emotional issues are associated with conduct disorders. Among them are poor performance in school, difficulties in social relationships, and eating or sleeping disorders. Therefore, it’s important that you, as a family, are vigilant to prevent, detect and treat these emotional issues in time.

Emotions develop the moment babies are born. The emotional bond created between a mother and baby significantly benefits the baby’s social and emotional development. Emotions and the way children process them will become the pillars of their personality.

Even so, all children will have one or more emotional development issues during their childhood. These are normal as they are part of their development. Next, we’re going to take a look at the most frequent ones.

A tantrum is an immature way of expressing anger or discomfort or frustration. They’re normal from 12 months old to three to four years old.

Children act out during a tantrum with anger, screaming, or exaggerated crying. In fact, this is a form of communication that children use to express their unsatisfied desires or needs since, at 12-36 months, they still don’t know how to control their emotions.

Situations that provoke tantrums in children

Around the age of 2, children discover the power of tantrums. If a child throws a tantrum and you immediately respond to their needs, the little one knows they have a tool to manipulate your emotions and get what they want. Therefore, it’s best not to respond to tantrums motivated by the desire to attract attention or demand something.

Once they’re calm, you should talk to your child and make them understand that getting angry, crying, or kicking isn’t the way to get what they want. It’s important to set limits and not let them get their way. Over time, they’ll understand that the best way is through dialogue and communication, instead of tantrums.

However, if tantrums are due to a basic need, such as thirst, hunger, or fatigue, you need to calm the child, reassure them, and hug them. You can act in the same way as if you see the child is afraid or frustrated about something. Firstly, you have to connect with their emotions and then redirect the behavior and look for possible solutions.

Jealousy, one of the most frequent emotional development issues

Jealousy is an irrational reaction composed of sadness, loss of self-esteem, and feelings of envy towards another person. This is a normal evolutionary response to certain changes in a child’s environment.

This isn’t usually significant if the feelings are circumstantial or temporary. However, if these affect their self-esteem, their social and emotional relationships, or last longer than 5 years, jealousy can become a pathology.

As a result, jealousy can lead to behavioral problems such as aggressiveness, insecurity, or regression. It can also cause imbalances in interpersonal relationships, distrust, stubbornness, or envy.

Generally, the main cause of jealousy in children is the arrival of a new sibling. The child can suffer if their emotional needs aren’t met like before and they don’t feel as special.

However, there are also other causes that can provoke fear and feelings of losing affection from their parents in a child. For example:

To control and prevent jealousy, it’s important that the family strengthens the child’s self-confidence and gives them lots of affection. It’s also important to modify certain behaviors to prevent the child from feeling any loss of affection.

Sometimes the habitual behavior of children undergoes modifications. A child can regress in their learning. For example, they might lose a skill they already had learned previously. Other issues include wetting the bed again, talking in a childish way, or asking for a pacifier again.

These behaviors appear around 3 to 4 years old. This is normal and frequent when a child is dealing with a change in their environment that causes stress. As a result, regressions are a defense mechanism against trauma, conflict or emotional maladjustment. Therefore, it’s important not to get angry at the child. Regressions are usually fleeting. It’s a phase in which the child is seeking emotional balance.

On the other hand, it’s important to identify the causes that caused the regression. This can help the child. As a general guideline, you should never get angry with them, criticize them, or shame them for their behavior. It’s best to show solidarity with the child, show affection, and dedicate more time to them.

Most common causes of regression

Fear is a normal emotion that is part of childhood development. It’s an alarm system that helps the child avoid potentially dangerous situations. The situations of fear that children experience varies according to their developmental stage.

For example, with age, some fears subside while new ones appear to adapt to the changes in the world around them. These age-associated fears tend to be transient and short-lived. However, in some children, these can become chronic and pathological.

Fears according to age

If at any time the child presents any of these emotional development issues, it’s common to think these are normal. They’re part of normal development. Therefore, you always need to react from a place of affection, as long as it’s balanced. Excessive and overprotective affection can harm your child’s psychological development as much as a lack of affection.