The Differences Between Positive and Negative Reinforcement

Reinforcement is a very useful and effective behavior modification technique. This is especially the case when used to educate the little ones. In this article we'll explain how to put it into practice and what the differences are between positive and negative reinforcement. 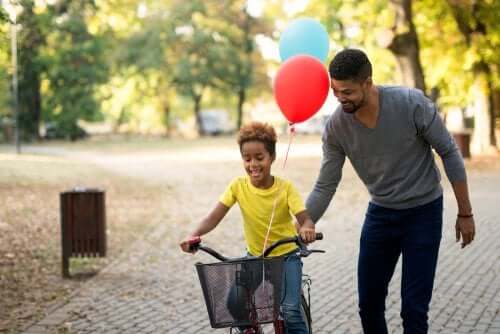 Reinforcement is a good teaching and training method that seeks to correct children’s behavior. As the name implies, this technique focuses on reinforcing desirable behavior in order to encourage the children to do it more often. And, in turn, it helps to prevent the re-appearance of inappropriate behavior. However, in order to correctly apply this psycho-pedagogical resource, you also need to know the differences between positive and negative reinforcement.

This behavior modification technique is based on the theory of operant conditioning, created by the psychologist Burrhus Frederic Skinner.

According to this author, behavior is determined by the consequences that we obtain with such actions. If we receive a reward then we tend to repeat those actions, and not repeat those that produce negative consequences.

Differences between positive and negative reinforcement

Associative learning is a process that consists of creating cause and effect relationships between behavior and stimuli. Therefore, this is very useful for changing children’s behavior and intervening as we see fit.

One way to implement this type of learning is through positive or negative reinforcement. Here’s the difference between these two types of correction.

Positive reinforcement focuses on giving some sort of reward immediately after good behavior. This means that when the child behaves well it’s a good idea to reward them straight away. This will then increase the likelihood of them repeating those actions in the future.

Some of the rewards used as positive reinforcement are:

“The way in which positive reinforcement is carried out is more important than the amount.”

Some negative stimuli that are usually used as negative reinforcement with their withdrawal or removal are:

The benefits of using positive and negative reinforcement

Both positive and negative reinforcement are very effective and beneficial for the child’s development, since these teaching methods focus on stimulating and enhancing good habits. This, as a result, removes the need to penalize and punish bad behavior.

So, thanks to the fact that you’re reinforcing desirable actions, you’re preventing the appearance of undesirable ones. In this way, children learn that, through good behavior, they will achieve personal satisfaction.

In addition, the use of reinforcement also generates the following benefits in the child:

However, in order to make this happen, you must take into account that, when applying a reinforcement, whether positive or negative, it’s essential to explain the reason for the reward.

In other words, the child must understand what actions or behavior has enabled them to receive a reward. In this way, the child will understand and assimilate the cause and effect relationship that takes place in any given situation.

“What people feel is as important as what they do.”

Raising Children with Positive Self-Esteem
Positive self-esteem is a basic pillar to a healthy and adapted personality. Discover how to help develop a healthy self-esteem in your children. Read more »
Link copied!
Interesting Articles
Childhood behavior
The Key to Success: An Activity to Motivate Children