Many people aren't aware of the implications of specific language impairment in children. In this article you'll find everything you need to know about it. 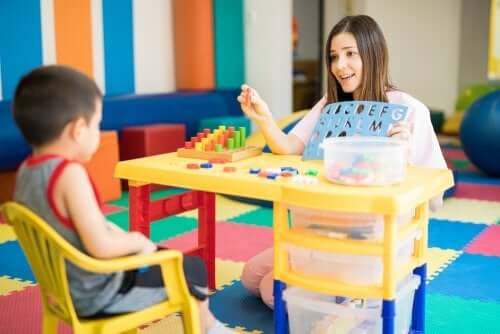 Specific language impairment (SLI) is a neurodevelopmental disorder that affects, mainly, the acquisition and development of spoken language. In addition, it relates to other problems regarding linguistic abilities and other learning areas.

According to Mónica Vilameá Pérez, speech therapist, this serious disorder affects around 2-7 % of children, which is a big number. And, they usually feel misunderstood because most people don’t know SLI’s symptoms.

“We talk about SLI as an invisible disorder because, if it doesn’t include other notorious symptoms, people don’t detect it. And then, the linguistic resources needed to fulfill social and academic linguistic demands are not available.”

It’s important to point out that children with this condition don’t show hearing, cognitive, motor, emotional, sensory or neurological impairment. In addition, they can present:

Therefore, we can state that specific language impairment leads to many school problems. Fortunately, a proper speech therapist intervention may solve all difficulties and limitations related to development and learning. Accordingly, an ideal moment to start therapy is when children are two or three years old.

As a result, you can get a better prognosis, but first, a suspected diagnosis is needed. Thus, it’s important to be aware of signs that may lead us to an early diagnosis.

The first signs of possible SLI cases appear when children are two years old. This a list of alarming signs you may notice:

In addition, when children are three or five years old they can present the following signs:

“An early prognosis of learning and language disorders is essential to start an early treatment that will allow school adaptation. And, it will also prevent alterations in the academic performance or emotional sequels. This may condition prognosis and treatment effectiveness.”

– Francisco Javier Garrido Torrecillas and others –

What should I do if I notice alarming signs?

If as a parent or a teacher you notice these signs, you should visit the pediatrician. Then, the doctor will probably refer you to a neurologist and a speech therapist. Finally, they will carry out the corresponding analysis to elaborate, if convenient, an SLI diagnosis.

Finally, it’s important to know that the Diagnostic and Statistical Manual of Mental Disorders, 5th edition (DSM-5) doesn’t include SLI as a diagnostic category. So, currently, this disorder is within the group of language impairments.